Illidan's Naga[1][2] consists of various tribes of naga who followed Illidan Stormrage into Outland. They controlled several of the watery areas of the shattered planet, including much of Zangarmarsh, and were led by Illidan's naga lieutenant, Lady Vashj, who ruled from Coilfang Reservoir in Zangarmarsh.

Having been summoned by Illidan Stormrage, the naga allied with him and began helping him with his new mission.

They were allied with the satyr faction, Illidan's Servitors and attacked the night elven villages on the coast of Azshara as well as the port Nendis. Illidan ordered them to destroy the elven ships but were interrupted by Maiev and her Watchers.[3]

When Illidan landed on the Broken Isles, a small group of the naga secured the entrance to the Tomb of Sargeras. Once Illidan entered it, the group was killed by Maiev's force.[4]

The naga and their sea witch Lady Vashj followed Illidan through the Tomb to the Chamber of the Eye to retrieve the Eye of Sargeras. Numbers of naga and mur'gul were left behind when the collapsing of the tomb started.[5]

The naga led by Serena Scarscale continued to attack the night elven base and Maiev who was escorting a runner out of the isles.[6] They continued to do so for weeks. When Maiev's reinforcements arrived, the naga attack was spearheaded by Lady Serpentra. With the reinforcements, the naga forces in the area were destroyed but Serpentra apparently escaped as did Illidan.[7]

Illidan's naga accompanied him to Dalaran Ruins in Lordaeron where naga summoners began channeling a spell through the Eye to destroy the Lich King in Northrend. Lady Serpentra guarded Illidan and constantly attacked the bases of the night elves and the Alliance Remnants. They also captured paladin Magroth the Defender. Most of the force and the summoners were killed thus ending the plan. Shortly before Illidan's execution, Malfurion learned that Tyrande may still be alive as she ahd fallen to a river. The archdruid agreed that the naga and Illidan will help find her.[8]

Illidan and his naga began searching River Arevass and located the priestess. The naga fought of the Shadowglen Trolls and their chieftain Krag'jin in order to break the dams on the river. They defeated the undead and successfully rescued Tyrande.[9]

Under the command of Lady Vashj, Illidan's Naga began to enslave the tribes of the Broken in an effort to bolster the naga's workforce and further their agenda in Outland. Nearly all of the Wastewalker tribe has been captured and put to work to drain the waters of Zangarmarsh. The plan was to take control of all the waters of Outland, and through them, its people.[10]

The Cenarion Expedition also traveled to Zangarmarsh[11] to study Outland's pockets of life. However, they discovered Zangarmarsh's lakes and marshes have consistently been drying up and began investigating in order to preserve the region's ecosystem.[12] The Cenarion Expedition discovered the naga have been draining the major lakes of Zangarmarsh[13] and sabotaged the nagas' steam pumps that were draining the lakes to prevent further damage to the marsh.[14]

Aided by adventurers, Ysiel Windsinger and Watcher Jhang led an expedition to investigate the evil machinations of the naga in the Coilfang Reservoir.[15] The expedition disrupted the nagas' operations and ultimately led to the slaying of Lady Vashj, ending their efforts to drain the waters of Zangarmarsh once and for all.

The last active naga component of the Illidari forces were the Coilskar tribe led by Lady S'theno. They fought during the Mardum campaign and helped capture the Fel Hammer. After this, they used this ship as their base of operation. The Coilskar forces briefly appeared on Niskara, and were also active during the Broken Shore campaign. 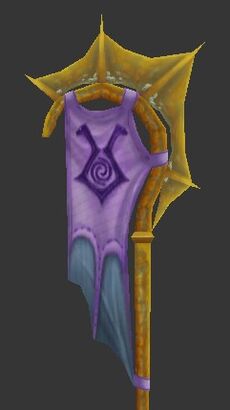 The banner of Lady Vashj.

Whether the group still exists after the events of The Frozen Throne is not stated, but if it does, the following tribes serve Illidan and are thus very likely a part of the group.

The following beasts were known to serve Lady Vashj: