From Wowpedia
(Redirected from Illidan's forces)
Jump to: navigation, search

The Illidari is the faction of Illidan Stormrage[2][3] and represents his servants[4][5][6] and a specific, elite faction of his army made of demon hunters,[7] but this has changed[citation needed]  under the Slayer's leadership to also include Broken, naga, and shivarra forces. The Illidari are also known as Illidan's Forces[8][9] (or Illidan's forces)[10][11] or Illidan's army.[12][13][14] It consists of various factions that have banded together under Illidan's rule. They were one of the prime enemies of the Alliance and Horde in Outland, the other being the Burning Legion. Illidan commanded vast armies throughout Outland, and even a few select groups on Azeroth.

After Illidan's death at the Black Temple, many of the demon hunter survivors were imprisoned by Maiev Shadowsong in the Vault of the Wardens, along with the corpse of their master. Later, the freed Illidari regathered with the forces left behind on Mardum, seized control of the Fel Hammer, which became their order hall, and they now fight the Burning Legion alongside the other class orders during the demons' third invasion.[15] 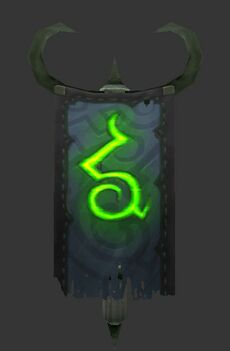 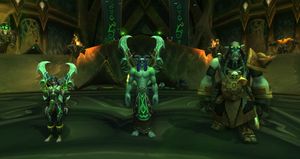 Leadership of the Illidari.

Please add any available information to this section.
Over the course of Illidan's career as one of Azeroth's most prominent heroes or villains, he had amassed various followers, servitors, and allies. Those that have flocked under Illidan's banner were enticed with either promises of power, vengeance, or were subjugated by Illidan himself.

Illidan also used the Shrine of Lost Souls to feed his army of unbound demons in exchange for their service, freeing them from the addiction of fel magic.[16]

Rise of the Illidari demon hunters

[Sargerite Keystone] during the invasion of Mardum. When they returned, however, they found Illidan had fallen during the Sha'tar's assault on the Black Temple. The Illidari demon hunters were imprisoned by Maiev Shadowsong and her wardens who were waiting for them when they returned to Outland. However, during the third invasion of the Burning Legion, Maiev freed the demon hunters so that they would contribute to Azeroth's defense. The freed demon hunters had then reformed the Illidari as their demon hunter class order and have taken command of Illidan's remnant forces in order to continue their crusade against the Burning Legion.

Following the Third War, Kil'jaeden confronted Illidan and made him an offer he could not refuse. Kil'jaeden was angered by Archimonde's defeat at Mount Hyjal, but he had bigger concerns than vengeance. Sensing that his creation, the Lich King, was growing too powerful to control, Kil'jaeden ordered Illidan to destroy Ner'zhul and put an end to the undead Scourge once and for all. In exchange, Illidan would receive untold power and a true place amongst the remaining lords of the Burning Legion. Illidan agreed and immediately set out to destroy the Frozen Throne, the icy crystal cask in which the Lich King's spirit resided. Illidan knew he needed allies to accomplish his tremendous task so he cast a powerful spell and called the naga to the surface, calling in some old Highborne debts.[17] A group of naga led by Lady Vashj emerged from the depths and pledged themselves to him. They did not come because of their shared history, nor did they respect his demonic power. They came because the Old Gods willed it. They noticed Illidan and his hunger for power. They sent the naga to aid Illidan in his campaign against the Lich King so that it could spark a new war. If the former night elf became troublesome, the Old Gods could simply command the naga to cut out his fel-corrupted heart.[18] Illidan's attempts to destroy the Scourge ended in failure however, and Illidan retreated to Outland in order to escape Kil'jaeden's wrath. Under the command of Vashj, the naga began to enslave the tribes of the Broken in an effort to bolster the naga's workforce and further their agenda in Outland. Nearly all of the Wastewalker tribe has been captured and put to work to drain the waters of Zangarmarsh. The plan was to take control of all the waters of Outland, and through them, its people.[19] Despite the naga's original motivations, Vashj remained loyal to Illidan until she was slew by adventurers when they invaded her lair in Serpentshrine Cavern.[20] Even after Vashj's death, Lady S'theno — captain of the Coilskar tribe — had taken command of Illidan's Naga and have maintained their loyalty to Illidan and the Illidari.[21]

During Illidan's campaign to oust Magtheridon from power in Outland and become the shattered planet's new lord, Illidan and his forces discovered a surviving Broken village who were also fighting against the Burning Legion. The village's inhabitants, ruled by Akama, swore allegiance to Illidan in return for him liberating them from orcish and demonic oppression.[22] Ever since then, the elite Broken tribe that was Akama's Ashtongue tribe were officially aligned with Illidan, and consisted of the most vicious and bloodthirsty individuals, handpicked by Akama himself.[23][24] Despite Akama's conspiracy to overthrow Illidan during the invasion of Outland, the Ashtongue tribe appear to have maintained their allegiance to the Illidari and have fought for them during the third invasion of the Burning Legion under the leadership of Battlelord Gaardoun.[25]

During the Argus Campaign, members of the Illidari traveled to Argus and to the invasion points. 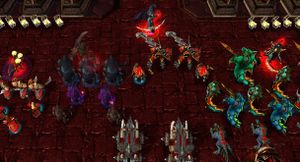 The main group of Illidari that are explicitly labeled as such seem to serve as an elite group within the overall faction. This group is composed mostly by demons of many species, particularly nathrezim, sayaad, terrorguards, felguards, and satyr, former minions of the Burning Legion who switched their allegiance after the defeat of Magtheridon.

They dwell primarily in Shadowmoon Valley and the Black Temple though a few Illidari Taskmasters can be found in Hellfire Peninsula.

The Illidari Taskmasters who dwell in the Ruins of Sha'naar in Hellfire Peninsula lord over the Dreghood Broken as they search for one of the seven Ata'mal crystals. In Shadowmoon Valley, Illidari appear to serve as front-line foot soldiers against the Sha'tar as they bring the war against Illidan to the steps of the Black Temple.

Satyr - A group of satyrs under Illidan, apparently brought by Illidan to Outland when he left Azeroth. The bulk of them were killed by Maiev Shadowsong on Kalimdor. Notable members are Zandras and Ambassador Jerrikar.

Fel orcs - When Illidan invaded Outland, Magtheridon's primary non-demonic forces were fel orcs, corrupted by his own blood. Led by Kargath Bladefist, the fel orcs are now in the Betrayer's service and primarily man the battlements of Hellfire Citadel. In addition, members of the Shadowmoon clan can be found on the Ata'mal Terrace of Illidan's Black Temple, and the survivors of the Dragonmaw clan — under their aged chieftain, Zuluhed the Whacked — capture and take control of nether drakes for service in Illidan's armies.

Demons - Magtheridon, as a servitor of the Burning Legion, took control of Outland and brought legions of demonic forces with him. When Illidan toppled Magtheridon, many of these demons swore allegiance to the new lord of Outland. Illidan's demons are free of their natural magic addiction, and the usual fel taint seen alongside the Burning Legion is not present with them.[26] The types of demons that are seen in the Illidari are:

Kael'thas's Blood elves - Illidan was briefly captured by his long-time jailor and nemesis, Maiev Shadowsong, shortly after arriving in Outland. It was primarily due to the intervention of Kael'thas Sunstrider and his blood elves that allowed the naga under Lady Vashj to free him. The blood elves under Kael's command, having been scorned by the Alliance, swore allegiance to Illidan and aided him in toppling Magtheridon. The Betrayer's most trusted legion of blood elf warriors is known as the Crimson Sigil; they are the highest commanders of the Illidari outside of the Black Temple itself.

Though Kael betrayed Illidan and now serves Kil'jaeden, some blood elves are still loyal to the Betrayer, such as the demon hunter initiates under Varedis, the elite demon hunters under Kayn Sunfury, and the Eclipsion - Blood elves under Grand Commander Ruusk.

Naga - Calling in some old Highborne debts from ten millennia earlier, Illidan raised the naga from their undersea lairs in order to aid him in obtaining the Eye of Sargeras, as well as preventing Maiev from following him. Under the direction of Lady Vashj - The naga followed Illidan into Outland where they were instrumental in both obtaining the aid of the blood elves and laying siege to Magtheridon's fortress. They now control the watery areas of Outland, including much of Zangarmarsh.

Mur'gul - The naga enslaved many mur'gul to act as both warriors and slaves.

Broken -The Betrayer obtained the aid of Akama and his Broken draenei sometime before the siege of the Black Temple. The Broken proved to be proficient assassins and scouts, and were able to allow Illidan and his army to reach Magtheridon. Though only the Broken of Akama's tribe serve Illidan willingly (though the same cannot be said of Akama himself), Illidan's forces in Hellfire Peninsula and Zangarmarsh have enslaved Broken for menial labor. Tribes working for Illidan:

Lost Ones - A few corrupted tribes of Lost Ones can be found serving Illidan and his allies. Other tribes seem to have been enslaved. 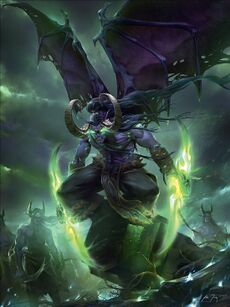 Illidan Stormrage and his demon hunters. 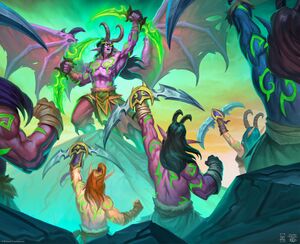 The most elite of Illidan's armies are his demon hunter servitors, night elves and blood elves trained to be the Betrayer's mightiest enforcers, the bane of demonkind. Zealously loyal to their master, the Illidari demon hunters have a strong identity and a close bond, although their heavy fel corruption and demonic techniques have inspired dread in their fellow elves. Prominent demon hunters took control of Illidan's depleted armies after their master's defeat at the Black Temple, and lead the remaining Illidari as they seek out their leader and battle the Burning Legion. By player choice, their foremost lieutenant is either Altruis the Sufferer or Kayn Sunfury. The Illidari's motive for seeking out their master will change depending on whom the player chooses as their right-hand-man: Altruis, no longer loyal to Illidan, desires new leadership for the Illidari; Kayn, loyal to Illidan's cause, wishes to rescue him from his predicament. 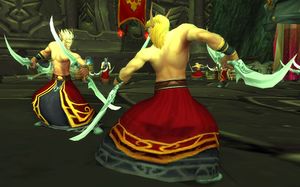 Demon hunters training in the Ruins of Karabor

The Illidari Demon Hunters were the top demon hunters serving Illidan as part of the forces under his command. The four (three night elves and one blood elf) trained initiates and supplicants at the Ruins of Karabor.

A fifth demon hunter at Illidan's service, Leotheras the Blind, does not hold the title of "Illidari Demon Hunter", apparently because he went insane during the training that killed three of his fellow trainees. 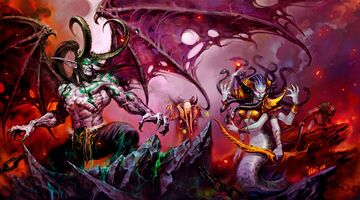 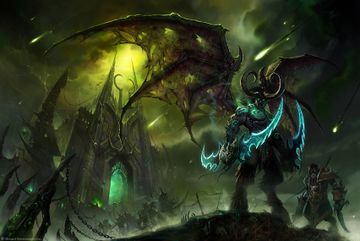 Illidan ruling from the Black Temple with Akama besides.

After the failed assault on the Frozen Throne, the blood elves remained in Illidan's army. They befriended the naga, whom they saw as brothers. Once the Scourge is taken out, they are planning to take over Kalimdor and driving out all the hated races.[30] The naga notably attacked Tol Barad to free the emprisoned blood elf evoker Zae'Rathis the Mad.[31]

Illidan wanted to create another Well of Eternity on Outland to fuel his blood elves' magical addiction.[32]

Illidan continues to plot with his generals, working out a new plan of attack. His list of enemies is long: the night elves, the Alliance, and the Lich King himself. He crosses into Azeroth rarely, and only when he is sure his enemies will not spot him. It is not time to attack yet, but the time is coming.[33]