The Illidari Council is a group of four blood elf bosses in the Black Temple. The fight is comparable to High King Maulgar since it sports a difficult pull and a rather chaotic battle for survival, which requires high situational awareness and fast reflexes from all raid members. 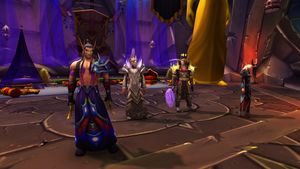 Illidari Council in World of Warcraft.

The Illidari Council were among the most talented and powerful blood elves Kael'thas Sunstrider led to Outland. The prince left them in Shadowmoon Valley to advise and assist his master, Illidan Stormrage, while he left for Netherstorm. The council vied for Illidan's favor and frequently schemed against one another, naming themselves the Illidari Council in a mostly ostentatious display, but Illidan acknowledged that they were exceptionally gifted in their respective fields: Gathios the Shatterer in matters of war and logistics, Veras Darkshadow in the realms of espionage and shadowing, Lady Malande's talent for upholding relations with Illidan's other servitors, and High Nethermancer Zerevor's arcane mastery. The council remained some of Illidan's most steadfast followers even after their own prince's defection to the Burning Legion.

On the eve of the Black Temple's fall, it was the council who organized much of the resistance against the Sha'tar and their allies. Illidan, obsessed with his mission to plot the downfall of Argus, had mostly lost interest in the battle's outcome, and had come to view his ruined kingdom on Outland as a sacrifice of little consequence. However, after accompanying the council to the temple's ramparts to observe the flow of battle, he knew this clash of the Legion's enemies was what Kil'jaeden had anticipated. The Betrayer ordered the Illidari Council to retreat and prepare for battle, freshly resolved to both win this battle and finish his own personal strike at the Legion's heart. With his demon hunters away on Mardum, the council were Illidan's last line of defense, and fought to their deaths in his service.[1]

The Illidari Council consists of a powerful paladin, rogue, mage, and priest. They share health and bring their iconic abilities to bear against their foes.

All raid members must have at least 11k HP buffed. A rogue wearing

Similar to High King Maulgar, a correct pull is difficult to set up, but extremely important. In order of precedence, the mobs should be assigned as follows:

Gnomes can experience line of sight issues when attempting the pull. They need to either go to the top of the platform or change their character model (e.g. with [Noggenfogger Elixir] or [Savory Deviate Delight]).

The critical element is the mage, who may easily die if one of the other bosses attacks him. It's possible to start the fight with an Imp (or other pet), which then takes the first Arcane Bolt. This gives the raid a second or so to get the mobs under control. Of course, the mage tank must give the pet just a split second head start, and gain Aggro on Zerevor (and spellsteal) as quickly as possible.

Lady Malandes heals must be interrupted under all circumstances, and all her other spells should be interrupted as much as possible. Since she's the preferred target of Gathios' blessings, she's invulnerable to one type of damage (physical or magic) most of the time. Therefore a total of four interrupters should stay on her - two physical and two magical.

[Deathfrost] and Mind Numbing Poison are highly recommended. If there's some AoE on her spot and she's blessed vs. magic, a last resort is to have a Rogue wearing the PvP gloves interrupt her by throwing. The group tanking/interrupting her must call out the target if a Divine Wrath gets through, so that the raid healers can adjust.

High Nethermancer Zerevors Dampen Magic must be spellstolen as frequently as possible. Everybody must keep at least 10 yards away from him to avoid arcane explosion.

Gathios the Shatterer is the main DPS target. The main tank should use spell reflect when the Seal of Command is Judged (this happens in regular intervals). The melee damage dealers must be extra careful never to attack him from the front, since an increase of his attack speed (after a parry) can mean near-instant death for the MT. This is particularly difficult, because if there's some AoE taking place, the tank has to move. The best practice is to stop melee until Gathios stands still in his new location.

Aggro (on Gathios) is not an issue, because the spell reflects create a lot of threat. After the second reflected Judgement, all damage dealers can safely ignore their threat meters and go all-out.

After a Vanish, Veras temporarily ignores his aggro list, until he's hit again by the tank. A druid or paladin tank is therefore better suited for this task than a warrior. If a warrior must tank him, it's highly advisable to set up an macro which follows an Intercept or Intervene directly with an Autoattack.

Two healers on the main tank, one on each of the three other tanks, remaining healers on raid heal. The whole raid has to watch out for a lot of different AoE effects. There's about six different types of AoE and debuffs which can occur, and there is nothing predictable. Raid members must be very quick to run out of AoEs, and healers must be extremely alert to heal through some poison debuff or other damage, while evading AoEs themselves.

This is probably the most difficult encounter in Black Temple to solo, as Lady Malande's heals can effectively mean the player has to do a few million more damage than the Council's starting health to secure a kill. Even when reduced to 1 hit point, Malande and/or Gaithos can still cast a heal before the player lands the killing blow, which can lead to some frustrating moments. The best strategy seems to be to focus on Gathios, blowing all cooldowns at the start. As the player gets close to a kill, he/she needs to put up DOTs or AOEs on Gaithos so as to greatly increase the chances that the player will get in one final damaging blow before Malande gets off a heal at 1 hit point. It is also helpful if the player does the encounter on the platform where the Council starts, since any AOEs will hit at least two other members and lower their life pool more quickly as well as make landing the killing blow easier.

Slaying
My work is done.

Enraged
FOR QUEL'THALAS! FOR THE SUNWELL!

Aggro
I have better things to do!

Aggro
You wish to test me?

Enraged
You wish to kill me? Hahaha, you first!

Akama says: Those who've defiled this temple have all been defeated. All but one!
Akama says: Let us finish what we've started. I will lead you to Illidan's abode once you've recovered your strength.