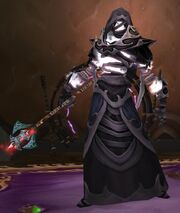 Nexus-Prince Haramad in the "flesh", slaying the unfortunate Ambassador Solannas

Image of Nexus-Prince Haramad is an ethereal quest giver located at the Stormspire in the Netherstorm. Haramad has another image of himself outside the Mana-Tombs, and makes an appearance in the "flesh" towards the end of his Netherstorm quest chain, emerging from his teleporter to fend off blood elf assassins.

Haramad sends players to obtain the Spirit's Song, one of the seven shards of the Ata'mal crystal, from the blood elves and the Burning Legion. After triangulating its position, the player discovers it is held by the nathrezim Culuthas. The player kills Culuthas and brings the Spirit's Song to Haramad at the Stormspire...only to be visited by an emissary of Prince Kael'thas, Ambassador Solannas, and two bodyguards. The selflessness of the player's act - bringing the crystal to him despite the immense power it contained - led Haramad to decide to deliver the crystal to the naaru, rather than to Solannas (and thus to Kael'thas). When Solannas, enraged, attacks Haramad's assistant (the player), Haramad's guards hold off the blood elves, and a moment later the Nexus-Prince himself emerges from a nearby teleporter and attacks, killing the Ambassador and his honor guards.

With the Ambassador dead and the Consortium's ties to Kael'thas severed, Haramad makes good on his promise and directs the player to use the teleporter he came through, attuning it to Shattrath City - where the player would then deliver Spirit's Song to the naaru A'dal.