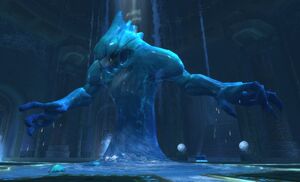 Immerseus when purified once again.

Immerseus is the first boss of Siege of Orgrimmar. This titanic elemental is the physical embodiment of secret reservoir waters that were corrupted after the Sha of Pride was released.

The ancient inhabitants of Pandaria recognized the vital importance of the lifegiving Pools of Power, building an underground system of aqueducts to safeguard the waters and nurture life in the Vale of Eternal Blossoms. The touch of corruption has animated and twisted these waters, and Immerseus stands as an unnatural embodiment of the Vale's sorrow.

The layout of this area and the visual framing of the boss as players enter the raid zone hearkens back to Lord Marrowgar at the entrance to Icecrown Citadel—we wanted to make sure that the first thing players saw when they entered the Raid was a huge and visually impressive foe. Long-time players (or pet collectors) may find the fight structure somewhat reminiscent of Viscidus in the Temple of Ahn’Qiraj.[1]

Immerseus begins with 100 Corruption, displayed as a visible power bar, and the objective of the encounter is to cleanse him by reducing his Corruption level to 0. Each time Immerseus is reduced to zero health, he will Split into a mix of dark Sha Puddles and watery Contaminated Puddles. As the Puddles move back towards the center of the chamber, damage-dealers must destroy Sha Puddles, while healers try to heal Contaminated Puddles in order to fully purify them, before they reach the central pool. Following each Split, Immerseus will reform with reduced health and Corruption depending on how successful the raid was in dealing with the two types of Puddles. This cycle will repeat until Immerseus is cleansed.

Tears of the Vale

Upon reaching zero health, Immerseus becomes unstable and bursts into a shower of Sha Puddles and Contaminated Puddles, which will attempt to reform in the pool at the center of the chamber. For each Sha puddle killed and each Contaminated Puddle healed to full, Immerseus's Corruption is reduces by one. When Immerseus reaches zero Corruption, he is cleansed of the Sha taint and becomes friendly.

Immerseus alternates between two phases: the "normal" phase and the "corruption" phase. The objective of the raid is to empty his corruption bar, which can only happen in the corruption phase; the raid must DPS Immerseus to zero HP in the normal phase to trigger the phase transition.

Immerseus' enrage timer has been estimated at around 10 minutes [2], which should not be an issue for most groups, especially on normal mode.

Tanks need to face Immerseus away from the raid (and away from each other) due to Corrosive Blast, and will need to regularly taunt off each other to avoid being one-shotted by this ability.

The rest of the raid will be periodically targeted by Sha Bolts. These leave a void zone and, with all void zones, players need to move out of them. The void zones persist until the phase transition, so players must carefully position the pools in such a way that they don't position themselves into a corner with no means of escape.

When Immerseus casts Swirl, the raid must simply rotate ahead of the beam. This ability is reminiscent of Durumu's Disintegration Beam and Wise Mari's Wash Away.

Players should take care not to enter Immerseus' circular puddle, as it cases both damage and a knockback.

Once Immerseus is brought down to zero HP in the normal phase, blobs of corruption will fly out of him. There are two types of blobs, Sha Puddles and Contaminated Puddles.

DPS (with tanks contributing) will need to head after the Sha Puddles and burst them down one at a time. For each Sha Puddle killed, players within 10 yards will receive a stacking buff increasing damage to other Sha Puddles by 25%, and Immerseus' corruption bar will permanently decrease by 1.

Healers will need to heal the Contaminated Puddles one at a time. The puddles slow down the more they are healed, and when healed to full, healers within 10 yards will receive 25% mana as well as 75% increased healing for 10 seconds. Healing a Contaminated Puddle to full health also permanently decreases the corruption bar by 1.

Any puddles that reach the boss will deal raid wide damage, so the raid needs to kill/heal as many puddles as possible before the remaining puddles reach the boss, and use raid cooldowns to survive the damage when they do. Immerseus will then re-form with reduced health (corresponding to his corruption bar), and the raid will head back into the normal phase.

The fight will then alternate between the two phases until the raid kills/heals enough blobs to empty the boss's corruption bar. When this happens, Immerseus becomes friendly, and the fight is over.

[No More Tears], the raid will need to attempt to stop Sha Puddles from ever reaching the boss during the Corruption Phase. The puddles are immune to

[Fear] and other forms of crowd control, but can be stunned, slowed, rooted and knocked back.

After 30 seconds, Immerseus will return to the Normal Phase, and any Sha Puddles that have not reached the boss at this time will transform into Tears of the Vale. They have little health and do not need to be tanked, but cast a raid-wide AoE that can quickly overwhelm healers (even in Flexible Difficulty), so the raid will need to nuke them down as quickly as possible. Once 10 such Tears of the Vale has been killed, the raid can then proceed to defeating the encounter normally.

Attempting the achievement will however bring the encounter's usually generous hard enrage timer into play; too many prolonged Corruption Phases can end in a wipe due to the enrage timer. The raid should aim for 3-4 Tears of the Vale per Corruption Phase until enough have been killed, or even 5 if the healers are confident.

Main article: Tears of the Vale