Immol'thar is an ancient void terror that is imprisoned within Dire Maul.

After the destruction of the Well of Eternity many Highborne slipped into lethargy. So it came pass that Prince Tortheldrin ordered the building of five pylons. Those pylons created a force field that could imprison the mighty demon Immol'thar. Hungry for magic, the Shen'dralar quickly mastered siphoning the demonic energy from Immol'thar. The energy was then used to grant the elves immortality.

Centuries later, the powers used to imprison Immol'thar and to control the pylons weakened. In order to maintain his vast power, Prince Tortheldrin turned upon his fellow Shen'dralar and began slaying them, draining their energies to replenish his own.

In Year 25, the Horde raided Dire Maul and discovered the Shen'dralar elves feeding on Immol'thar. They banished him into the Twisting Nether.[1]

In a desperate bid to restore the power and immortality they lost when the Well of Eternity was destroyed, the Shen'dralar summoned a demon into the western wing of Dire Maul and captured him within a force field, allowing them to use the void terror's energy for their own spells. Unable to fight back or even move for nearly 10,000 years, Immol'thar could only watch and wait for the day he might break free and rend the flesh of his captors. 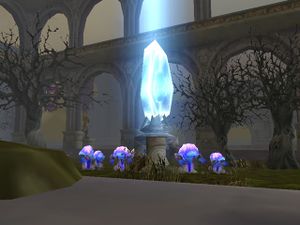 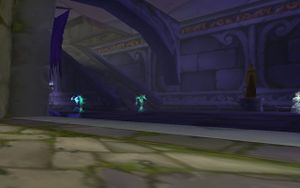 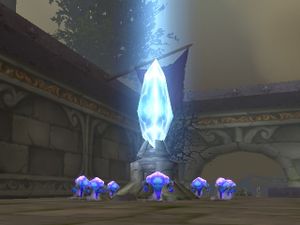 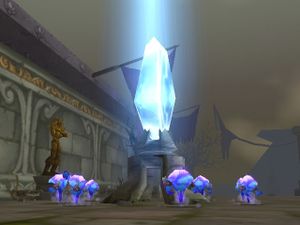 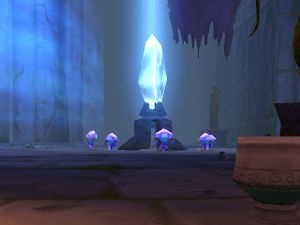 To slay the demon, you must first destroy the pylons maintaining his magical prison. There are five of these pylons, all located in Dire Maul West, and all are guarded by elite blue energy elementals called Arcane Torrents. Destroying all the arcane torrents by a pylon shuts down that pylon; you do not have to click on the pylon (it stops glowing and no longer projects a beam of light into the sky).

Moving through this part of Dire Maul requires passing through several doors. It is quickest and easiest to use the west entrance rather than the north (though the two are connected by the Library and Immol'thar's prison chamber). The west entrance puts you at the Capital Gardens, a large green courtyard guarded by hostile elite trees. Ironbark Protectors patrol the paved area outside the grassy garden, walking alone or in pairs. These mobs are linked to Tendris Warpwood (who stands in the next courtyard); killing them here prevents them from helping him if you attack him later. Because the Ironbark Protectors are elementals, warlocks can banish them.

Once you clear the Ironbark Protectors, you can pull the Mana Remnants (blue arcane elemental creatures surrounding the pylon), which usually come solo or in pairs. Mana Remnants are elementals and are banishable by warlocks. There are eight guardians — make sure you get all eight before moving on.

Go to the west side of the Gardens where there are three exits. The middle one leads to a ramp and a courtyard with Tendris Warpwood. The north and south ones lead to a balcony that surrounds Tendris' courtyard. Take the north exit onto the balcony and head counterclockwise around the courtyard. Be alert for visible and invisible undead highborne. On the north end of the courtyard is a room full of ghosts and a ramp leading upward to another balcony. Clear the ghosts near the ramp (you may have to clear them all, as they have a wide aggro radius) and climb it to the upper balcony.

The upper balcony has a pylon on the north end and one on the south, each guarded by Mana Remnants. In the way are hostile undead high elves. Clear these mobs, and the Mana Remnants, to shut down the north pylon.

Proceed clockwise and you eventually reach a Shen'dralar Ancient, a neutral highborne who gives the quest The Madness Within. As her quest requires you to kill Immol'thar, and you're here to do that anyway, you might as well accept it. Continue clockwise to the southern pylon and destroy the elementals guarding it.

Beyond the southern pylon is another ramp leading to a ghost room (the southern counterpart to the north room you passed through), but it is easier to jump down to the lower balcony than to fight more ghosts. The southern end is also patrolled by Illyanna Ravenoak and her pet bear Ferra, which is another reason to avoid it unless you have time and want extra loot.

From the lower balcony you can jump down to the ramp that leads to Tendris, or jump directly into the safe northeast corner of his courtyard. If you killed all the Ironbark Protectors in the first courtyard, Tendris is an easy fight. You can safely move from the northeast corner to the neaby door without aggroing him.

Beyond the door is a hallway with visible and invisible undead highborne patrolling. Once you clear those you can rest and prepare for the battles in the next room, Immol'thar's Prison.

The Prison is a large round chamber patrolled by arcane elementals; the center portion is blocked by a magic wall.

Solo mobs in the circular outer portion are Residual Monstrosities; these have a strong knockback attack and when you kill them they spawn several non-elite arcane elementals that attack with multiple AOE attacks like a mage's arcane explosion. The best way to deal with them is to run away as the Residual Monstrosity dies and let them explode at a safe distance while killing them with AOE or ranged attacks (otherwise their multiple AOE attacks are very dangerous).

Group mobs are an elite Arcane Torrent surrounded by several smaller non-elite Arcane Feedback; it is easiest if a warlock banishes the elite so the group can kill the little ones and then tackle the elite without distractions. You'll want to clear many of these patrollers so they don't add while dealing with the pylon guardians.

If you need a safe place to rest, there is a corridor in the northeast that leads to the Library; once the Prison is out of sight, you are safe from all patrols. The Library has the Shen'dralar Provisioner in the southeast corner, who can repair your gear.

There are two pylons in the Prison, one at 5:00 and one at 1:00. These fights work just like the other pylon fights. Once you power down these two pylons, the magic wall at the center of the Prison collapses and the highborne maintaining it call out a warning.

Once the wall is down, the demon Immol'thar is free, but he attacks his highborne jailers first and doesn't leave the arena-like courtyard where he was imprisoned. If there are any elemental guardians patrolling the outer chamber you can run to the central arena; their aggro radius is small enough that once in the arena you should be safe from them. If one attacks, be sure to face toward or parallel to Immol'thar, otherwise they may knock you into him and start that fight early.

Use standard boss tactics. He spawns floating eyes that slow melee and spellcasting; it is best to have one character devoted to eliminating the eyes. The eyes can also heal him if left alone too long. Giving the tank

[Gift of Arthas] and

Once you kill Immol'thar, don't forget to go into the Library and kill Prince Tortheldrin for the Madness Within quest.