From Wowpedia
(Redirected from Immortality)
Jump to: navigation, search

An immortal is a being who will not die of old age and is generally resistant to sickness and injury. Immortality does not confer an immunity to injury nor death by unnatural means.

Verbatim from the Warcraft Encyclopedia:[1]

Many immortal and near-immortal creatures exist in Warcraft. A number of these creatures are fundamentally incorporeal beings, but others lead a primarily physical existence.

The Nature of Immortality

Immortals in Warcraft are generally resistant to sickness and injury, but immortality does not confer invulnerability. Immortal beings can still be wounded and even killed. Indeed, many immortals have perished over the course of recorded history, particularly during the War of the Ancients. The death of an immortal is just as real as any mortal death and, barring a few extraordinary cases, just as permanent.

What, then, does the term immortality mean in Warcraft? Immortal creatures essentially stop aging when they reach adulthood, and thus, they cannot die merely from old age. In addition, they tend to be more powerful than most mortal creatures, although this tendency does not always hold true. Even godhood itself is no guarantee of superior might. Consider the titans' defeat of the Old Gods. The titans are not gods, but their vast power allowed them to imprison the Old Gods far below the surface of Azeroth. 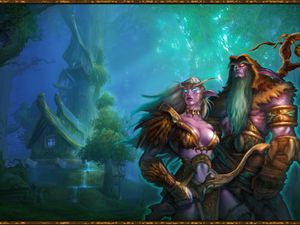 The night elves were once immortal

Furthermore, immortality need not be a lasting state of affairs. The night elves, for example, were immortal for thousands of years, but sacrificed their immortality during the Third War. Today they are a mortal race, and they are accordingly classified as such, rather than listed herein.

There are also quite a few races and individuals who have attained immortality after leading a mortal existence. Most demons in the Burning Legion were once mortal creatures.

Last but not least, there are creatures that can be considered nearly immortal. Technically these beings are mortal, but for one reason or other, they have a lifespan that greatly exceeds several millennia. Indeed, these mortal creatures might even be considered effectively immortal due to some external factor, as with Ysera's consorts, who almost never emerge from the Emerald Dream.

Night elf lore states they were once immortal, granted to them by the Well of Eternity. The early night elves gathered around the Well and its energies infused them as they built their civilization.[2][3][4] They sacrificed the source of their immortality and power during their conflict with the demons of the Burning Legion during the War of the Ancients.[5]

After the night elves lost their immortality due to the destruction of the Well of Eternity, Nozdormu, the Timeless Dragon Aspect of the bronze dragonflight, blessed the first World Tree, Nordrassil, with the gift of immortality. As long as the tree stands, the night elves would forever have the chance to learn.[6]

Nordrassil contained within it the truest, purest essence of life energy on Azeroth.[7] The trees of life were enchanted saplings of Nordrassil from which the night elves drew their life energies. These mysterious ancients were the key to the night elves' immortality and harmonious coexistence with nature.

When Nordrassil was severely damaged during the Third War, the night elves again lost their immortality. Some wayward druids sought to reestablish the link between their spirits and the eternal world by planting a special tree.[8] This second world tree, Teldrassil, did not allow the elves to regain their immortality. The promise of immortality associated with Teldrassil came primarily from Fandral Staghelm and not from any divine beings.[9] Nozdormu, perhaps tellingly, withheld his blessing due to Fandral's actions during the war against the qiraji.[10] Fandral's promise has yet to come true.

Lorekeeper Vaeldrin found scrolls predating Queen Azshara and sought to find a power that would restore their immortality. This led his expedition to Pandaria and the Pools of Youth, which was used during the mogu empire to extend the lives of the mogu. However, Vaeldrin discovered that the waters only transfer life between people.[11]