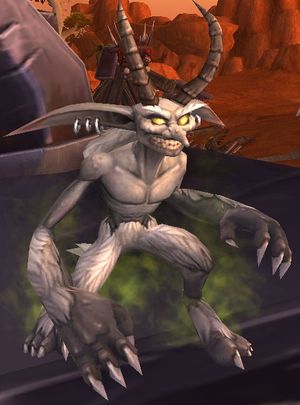 The Imp is the first demonic minion available to the warlock, summoned through the

[Summon Imp] ability, and available at the beginning of the game.

Of the five regular warlock pets, the Imp has the least health, but it makes up for this with a range of defensive and utility abilities.

[Demonic Empowerment]: Increases the Imp's health by 20%, its Haste by 50% and its damage dealt by X for 10 seconds.

All warlocks start out with an imp.

Originally, a quest chain was required to obtain the demon. After Patch 3.3.0,

[Summon Imp] became a trainable spell, purchasable at level 1 and requiring no quest chain. As of Patch 4.0.1, Warlocks now start out with an Imp minion.

A common mistake some warlocks make is to tell their Imp to attack when Firebolt isn't set to auto-cast. Since Firebolt is the Imp's only attack form, this gives it nothing to do; right-click on the Firebolt button to fix it. An Imp will also not attack if it is out of energy; it will also refuse to attack mobs that are immune to fire.

[Dispel Magic] in terms of what it can remove from friendly targets, with the added bonus that it can be cast while the Warlock is feared, silenced, stunned, or otherwise unable to act. This makes it possible for the Warlock to remove fears, slows, sheeps, silences, and magical stuns and roots (such as a Paladin's

[Hammer of Justice] or a Mage's

[Frost Nova]) without popping a PvP trinket, as long as the Imp itself is not incapacitated or out of range. For this reason, in PvP situations it's a good idea to remove Singe Magic from auto-cast and instead use a macro to cast it on yourself when necessary. Plus, being able to strip off Shadow Priest's (or other Warlock's!) DoTs is a great help at mitigating incoming damage. In Useful macros for warlocks you will find a great macro that will cast it on your enemy on a left-click, or on yourself with a right-click

As with the other warlock pets, the Imp talks. When asked to attack, it will sometimes complain about it in Common or Orcish. At other times, it says something indecipherable in Demonic.

"Is this REALLY necessary?!"
"This was NOT in my contract!"
"Can't we all just get along?"
"Ohhhh sure, send the little guy!"

"You know, we've had a lot of fun together, it's been really special, but I think it's time I should start seeing other warlocks. Just a little on the side. No no no it's not you, it's not you, it's me. I just need my space, it's nobody's fault."
"Don't call on me, I'll call on you."
"Argh! I feel so used!"
"Goodbye. Thanks."
"*indistinct grumbling*...I wish...*indistinct grumbling*...wish you were DEAD."

"What? You mean you can't kill this one by yourself?"
"Make yourself useful and help me out on this one!"
"Release me already, I've had enough!"
"Alright, I'm on it! Stop yelling!"
"No shi rakir no tiros kamil re lok ante refir shi rakir"
"Maz ruk X rikk xi laz enkil parn zila zilthuras karkun thorje kar x zennshi"