“You dare assault the seat of my power? Is this the work of that traitor Cho'gall? Kneel and swear fealty to me, and I may yet spare your lives for my coliseum.”

Imperator Mar'gok is a powerful ogre mage that rules the Gorian Empire with a watchful eye and an iron grip. He also oversees the Highmaul Coliseum, though he apparently only leaves the palace to attend legendary battles.[2] He has mastered techniques that would be considered fringe arcane studies by Azerothian mages.[3] 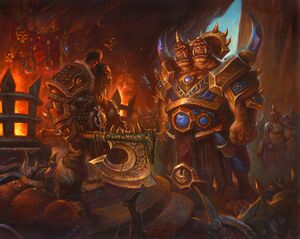 Grommash Hellscream sent an emissary to the ogres at Highmaul, who revealed that Grommash wanted them to prove their worth or be made extinct. A few hours later saw the Iron Horde laying siege to Highmaul at his command. Not long after Imperator Mar'gok displeased that the Iron Horde could possible claim Highmaul sought peace with the Iron Horde and personally met with Grommash. During this meeting Imperator Mar'gok remarked even with their strength the Iron Horde was weak due to not containing the magic the ogres of Highmaul were capable of. The Imperator then remarked that even if the Iron Horde did claim Highmaul, they would lose an entire year in removing the bodies in order to successfully live within city. Grommash in response retorted that not only did they were winning, they did not want Highmaul but their lives. However he did acknowledge the might of their sorcery and ordered the Imperator to teach to them and in turn some of them may live. After a brief council Imperator Mar'gok tried to call to get Hellscream to call off the siege before teaching, pointing out each ogre death was one less person who could teach the orcs. However Hellscream was adamant that the ogres teach them the magic of the breakers immediately, and knowing he had no choice if he wished to save Highmaul Imperator Mar'gok conceded to his demands.

At Hellscream's command Imperator Mar'gok and his ogres fought orc warlocks who the Iron Horde had taken prisoner and after witnessing the ogres winning (despite the losses they suffered) Grommash ordered for the siege of Highmaul to stopped and that declared the ogres of Highmaul were now servants of the Iron Horde. Approaching the Imperator, the Warchief of the Iron ordered him to deliver all orc slaves in Highmaul to Kargath Bladefist and warned that any attempt at treachery or rebellion would see them returning to claim his blood. When Ko'ragh approached afterwards Mar'gok either wanted to take out his frustrations out on his servant or believing that he had hidden his ability to become to immune to magic beat Ko'ragh.

Once he returned to Highmaul Imperator Mar'gok remarked to himself that while he would serve the Iron Horde, they would do so "for now", showing his intention to eventually break free from the Iron Horde's control.[4] 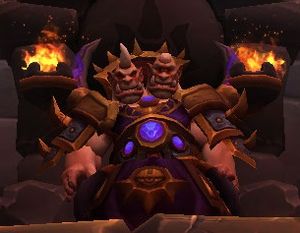 Imperator Mar'gok sitting on a throne.

Mar'gok appears in the Coliseum when the garrison commanders fight between themselves. He congratulates and rewards the last standing gladiator.

The Imperator arrives in Highmaul to watch Kargath Bladefist do battle in the arena once again even in his "handicap" status. After the orc is killed by the heroes from Azeroth, Cho'gall escapes from his prison cell through a void portal. The sorcerer king couldn't keep the traitorous under his control. The Highmaul guard attempts to stop Cho'gall by Mar'gok's command, but ultimately failed. The Imperator calls for sealing the gates from the incoming Pale orcs that the ogre magi summoned to the city, and proclaims that Highmaul will not fall to the likes of him before teleporting away.[5]

The sorcerer king lends a hand to the Twin Ogron and Fel Breaker Ko'ragh as the adventurers climbed up the city interior.[6][7] In the throne room, High Councilor Mal'gris tells him that Highmaul is lost and must abandon it. Mar'gok rejects his advisor's words that the Gorian Empire will not be overthrown by these "peasants". Mal'gris sees the adventurers enter the throne room and they seek the stones. The Imperator commands him and the other advisors to remove them in his presence, but they are all killed. The sorcerer king then engages the heroes himself and, despite using powers of the ancient relics from the Gorian Empire, is killed by the heroes and proclaims that he is still king.[8]

On Mythic mode, when Mar'gok is about to defeated, Cho'gall arrives in the throne room with his Pale orcs, seizing the sorcerer king in a field of magic. Declaring that his reign has come to an end, Cho'gall draws the power of the relics from Mar'gok's body, killing him in the process.[9]

At some point, his forces were victorious in the Battle of Red Spires. 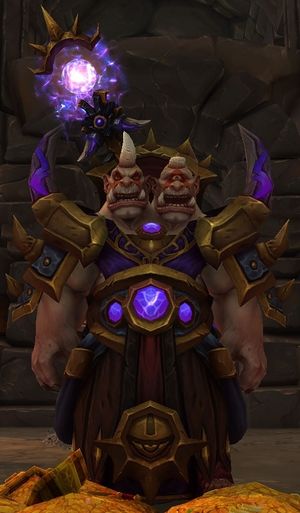 Imperator Mar'gok appears in The Coliseum to congratulate the last gladiator standing, and reward them with riches.