Imperial Vizier Zor'lok was Grand Empress Shek'zeer's 'voice,' the one who delivered her messages and will onto her fear-driven armies. He is first seen in

[90] The Empress' Gambit where he is challenged by and kills the Klaxxi Paragon Malik the Unscathed. He guarded the way into the Dread Approach until killed by Klaxxi-aligned adventurers.

Zor'lok is the first boss of the Heart of Fear.

Zor'lok shrieks his proclamations so they're heard throughout the sprawling mantid palace. He is the Voice of the Empress, and his words alone inspire the insectoid race's warriors to give their lives without question. Unwaveringly loyal, Zor'lok will stop at nothing to defend his beloved matriarch, regardless of the corruption within her.

Stage 1: Her Gifts are Many

Stage 2: We Will Not Disappoint Her

Start the encounter with a Stampeding Roar, then attack the boss to see which platform he flies to first. The entire lower floor is covered in pheromones which tick for 19,000 Nature damage every second and silences all units inside it, so getting to a platform quickly is imperative. In non-Heroic mode difficulties, Zor'lok can choose either the left or right platform to start the fight. Every 20% health lost, he will move to another platform. Heal up and get shielded before entering the pheromones to cross to join him. 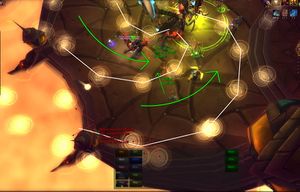 The left platform grants Zor'lok Attenuation. Attenuation is a large set of sonic rings traveling outward from the center of the platform in a spiral pattern in a straight line, before splitting near the outer wall. The rings will spawn in either a clockwise or counter-clockwise direction. To avoid attenuation, the most fool proof way is to swing the camera from above and follow the movement of the spiral. Don't be too far out. Don't be too far in. And don't run too fast!

Attenuation can generate clockwise and counterclockwise spirals, but this diagram only illustrates one.

The right platform grants Force and Verve. Zor'lok will spawn three Noise Cancelling zones randomly around the platform, which look like the turtle pet ability

[Shell Shield]. In most difficulties, there is a limit to the number of players who can benefit from the shields to prevent the entire raid from stacking in one bubble. The first shield will be cast in melee range, then the second a few yards away from the boss, and the third out at range. Thus, melee and the tank should move to the first shield spawned, healers should look to the second, and ranged attackers should find themselves under the third.

At 40% health, Zor'lok will fly from the third platform to the center of the room and inhale all of the pheromones, then

[Death Grip] all members of the raid to his location. He will then start using all of his phase one abilities at the same time. This is thus a burn phase, so pop

[Time Warp] and all other cooldowns to quickly burn him down, all the while dancing through Attenuation, running under the shields for Force and Verve, and freeing Converted players.

Trash mobs
We are the extension of our Empress's will.
Ours is but to serve in Her divine name.
Never to question, nor to contemplate; we simply act.
We fight, toil, and serve so that Her vision for us is made reality.
Her happiness is our reward, her sorrow our failure.
We will give our lives for the Empress without hesitation. She is the light, and without Her our lives will be lost to darkness.
The chaff of the world tumbles across our doorstep, driven by fear; Her royal swarm will whisk them away.
They are but the waves crashing upon the mountain of Her divine will. They may rise again and again; but will accomplish nothing.
We are unfazed. We will stand firm.
The Divine challenges us to face these intruders.
And so it falls to us, Her chosen voice.

Aggro
The divine chose us to give mortal voice to Her divine will. We are but the vessel that enacts Her will.

Inhale
Through the air we breathe. She strengthens our voice.

Exhale
Behold the voice of Her divine wrath.

Phase 1
Her gifts are many, our gratitude immeasurable.

Phase 2
She tests us. We will not disappoint Her.

Phase 3
We are as unwavering as the amber that shapes our halls. With Her might we will vanquish all who dare intrude upon Her divine home.

Convert
Her will is greater than us all. You will join us or you will perish.

Echoes of Power
Our voice gives form to Her will.

Death
We will not give in to the despair of the dark void. If Her will for us is to perish, then it shall be so.

Unused quote
They were clearly unworthy of Her divine embrace.