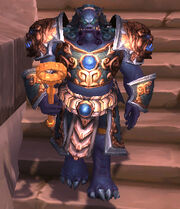 Beat 6 Possessed Whitepetal Defenders until they're freed of mogu possession.

The Shao-Tien Mindbenders have taken over the minds of our defenders down at Whitepetal Lake to the west. Get down there and kill the mogu that are controlling them, but don't kill the defenders! Killing their captors should free them from their mind control.

Sooner would be better. Anji might try to go down there to help soon, and her ability to restrain herself when in the heat of things is not one of the qualities I married her for.

Or you could dispel them if that's your thing. You seemed like the type that might want to beat some people up, though.

More than one pandaren is thankful for your help today, that's for sure.

[Purge]) to dispel the mind control buff on the defender, however, it can be used and still receive quest credit.