In the House of the Red Crane

Enter the basement of the Temple of the Red Crane and defeat the Sha of Despair. 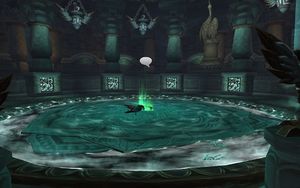 "Broken are the bodies wherein hopeless hearts reside - the blight of despair strikes forth from inside."

This was the last piece of wisdom the Red Crane imparted to me, just hours before the Sha outbreak. It makes sense now...

<Name>, when the Sha attacked, they broke forth from the temple's basement...

All of his teachings - the very Way of the Crane itself... it's all been preparation for facing the Sha of Despair.

The Red Crane has been expecting this conflict for centuries!

("Sha of Despair: Haunting the basement of the Temple of the Red Crane.")

You have vanquished the Sha of Despair. My order can handle the remaining cleanup from here.

It seems the time has finally come to face the consequences of Shaohao's actions.

This conflict has been a long time coming - the arrival of your people was merely a catalyst. Now, your help will be necessary if Pandaria is to survive.

Head inside the temple and go down to the bottom. Chi-Ji, the Red Crane, is in the center of the basement laying in a crumpled heap.

Interact with the crane:

<Reach out to touch Chi-Ji>
Chi-Ji gets to its feet and then starts floating up toward the ceiling.
Anduin Wrynn says: What? What's happening...
The Sha of Despair appears out of the ground.

Anduin Wrynn says: It's calling out more sha! Focus them down first, <name>! 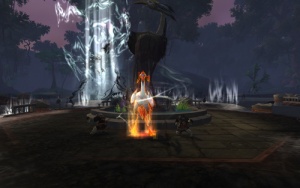 The red crane lowers itself down and stands in the middle of the room.
Anduin Wrynn says: We did it!
Chi-Ji says: It seems hope has triumphed after all...
Chi-Ji says: There is little time to celebrate - many more followers of the Way still battle outside.
Chi-Ji says: Seek me near the crane statue at the center of the temple grounds. We will speak there.

This completes the "Temple of the Red Crane" portion of

Interrupting Gloom Whirl is vital, so always keep the Sha of Despair targeted. Killing the Echoes heals you, which is extremely helpful if you cannot heal yourself.

Despite Anduin's advice, there is no need to defeat the Echoes of Despair summoned by the Sha's Call of Despair attack. Despite re-casting the Call of Despair, the Sha does not appear to summon more Echoes unless some have been defeated. Once the Sha is defeated, all Echos are instantly dispersed. Ranged classes can therefore simply stay out of aggro range of the Echoes, and focus all their attacks on the Sha itself.