For other usages, see Infernal (disambiguation).

Infernals are nearly mindless[3] amalgamations of matter and fel energy, created by more powerful and intelligent demons.[4] Acting as living siege weapons, these brutes use blazing fists of fel fire and stone to hammer down the defenses of their enemies.[5] Falling to earth as green, molten meteorites, infernals exist only to destroy every living thing in their path. Though their lifespans are limited, the mighty infernals have been known to destroy entire cities before their energies dissipated back into the Great Dark Beyond.[6] 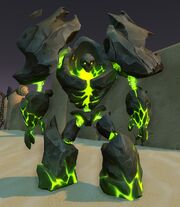 The infernals are the embodiment of primal force. They are creatures that exist only to crush, pummel, or crash through whatever obstacles-living or not-lay in their path. The spells of the warlocks and other dark sorcerers of the Burning Legion make them a force nigh unstoppable.[7]

The dreadlords mark the pinnacle of their dark powers with the devastating ability to summon a fiery infernal. At their call, the infernal will streak down from the sky, stunning and wounding nearby enemy forces when it crashes to the earth. The infernal, engulfed in searing flame, will then rise to do the dreadlord's bidding.[8]

Although they are technically constructs, some have been shown to be in possession of hearts[9][10] that burn with intense heat, and felblood flowing through their bodies.[11] Minfernals are ill-tempered constructs of flame and rage that sometimes rise from the remains of larger infernals who fall in battle.[12]

Although often considered mindless, they do have souls,[13][14] and some infernals have been known to show a modicum of self-awareness. One of these is Raze who, during the quest Shadoweaver, would eagerly shout out "RAZE SMASH!" when fighting enemies, and would even instruct the player in how to make use of its abilities (although it should be noted that these instructions essentially boil down to "You point, I smash", further highlighting the limited thoughts of Infernals). Another example is Krosnis, as Khadgar mentions that it was capable of telling others its name.[15] When Kroshius was originally brought back to life he would yell "Kroshius live? Kroshius crush!", and after the Shattering he will still eagerly shout at any that engage him in combat. Another infernal on the Broken Isles even decided to keep an elf's heart as a keepsake.[16]

Infernal golems that have yet to be infused with fel.

The Deathforge in Shadowmoon Valley provides some details on how infernals are made. First, warlocks ritualistically summon fire elementals into pools of fouled water or lava, corrupting them until they turn into demonic "infernal souls".[17] These infernal souls are then fused together with a collection of fel rocks by mo'arg and gan'arg engineers (known in the Deathforge as Deathforge Smiths and Deathforge Tinkerers). When this process is complete, the end result is a newly-crafted infernal.

The bodies of infernals also seem to be centered around an infernal power core.[18][19][20] When an infernal is defeated, they can be easily re-summoned by infusing this core with felfire,[21] allowing for the demon's immediate return from the Twisting Nether. Several such drained cores can also be combined on their own to temporarily summon a single infernal.[22]

The stone that infernals are made of still contains large amounts of fel magic even after the infernal's death. If not gathered, the debris left behind from slain infernals will continue leeching corruption back into the ground.[23]

These cores can remain dormant, allowing for easy storage when stacked into piles, allowing for the infernals to be summoned from the skies as meteors, or simply picked up by any adventurer that might come across them.

[Infernal Brimstone] can also be rarely mined from these demonic corestones.

Some infernals are made by warlocks infusing pieces of Argus with fel energy to create living siege weapons.[24]

Minfernals can be captured in pet battles in Felwood.