This article is about warlock minion. For other usages, see Infernal (disambiguation). 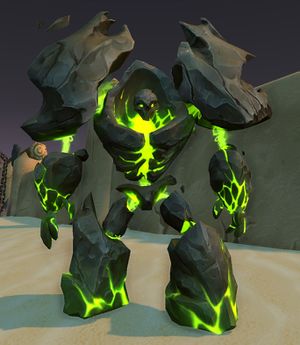 “The master of every infernal worries not about its death, but that it might survive too long.”

The Infernal is a temporary demonic guardian minion available to the Destruction warlock, summoned through the

[Summon Infernal] is automatically learned by Destruction warlocks at level 58. Previously, the spell was granted on completion of a quest line from Niby the Almighty in Felwood, where the warlock had to defeat the Infernal Kroshius.

Infernals have no warlock-controlled abilities. However they do have

[Demonic Immolation Passive], a passive ability which deals point blank AoE fire damage (42% of the warlock's spell power every 2 seconds). They will also deal melee damage to their current target.

The Infernal will persist for 30 seconds. As a guardian pet, it cannot be directly controlled by the warlock, instead automatically attacking the warlock's target. Aside from the quite respectable melee damage it does, it also has a fire aura that will damage all units within melee range that aren't outright immune to fire damage. The Infernal also generates Soul Shards passively over time for the warlock, at a rate of 1 Soul Shard Fragment (1/10th of a Soul Shard) every 0.5 seconds, which is 1 full Soul Shard every 5 seconds and a total of 6 Soul Shards over its 30 second duration. This influx of Soul Shards causes a significant increase in the warlock's own damage, in addition to the damage done by the Infernal itself.

If the level 90 Destruction talent

[Grimoire of Supremacy] is taken, Summon Infernal becomes a much stronger cooldown, as the damage of

[Chaos Bolt] continuously ramps up with each successive Chaos Bolt cast while the Infernal is active. With this talent, it is a wise idea to pool Soul Shards before Summon Infernal, and to align it with any other significant cooldowns (such as

[Dark Soul: Instability]) to maximize the rate and benefits of the ramping Chaos Bolt damage.

The Infernal is especially useful in battlegrounds. You can drop an Infernal on a group of players to stun them and deal some AoE damage preceded or followed by

[Shadowfury], causing up to 4 seconds total stun time. Alternatively, simply summon it and let it loose; many people overestimate the infernal and will back off. Note, however, that like all warlock minions, the Infernal is vulnerable to being banished by an opposing warlock.

Prior to a certain patch, the summoned Infernal would roam free. Also, the only way to get the ability to summon an Infernal was to find a Book in Lower Blackrock Spire (LBRS). Subsequently the spell was learnt through a quest chain in Bloodvenom Falls, given by Niby The Almighty.

[Summon Infernal] is now automatically learnt when the warlock reaches level 58, provided they are Destruction specialization.

Prior to Patch 3.0.2, the length of time for summoned Infernal was 5 minutes; after this time, the Infernal would become hostile and had to be re-enslaved.

Prior to Patch 4.0.1, warlocks could also learn the ability from reading

[Grimoire of Inferno], which dropped from Scarshield Warlocks in Blackrock Spire.

In Cataclysm, Demonology warlocks could talent

[Ancient Grimoire] to increase the Infernal's duration by 10/20 seconds.

Although not under the warlock's direct control, it was drawn to attack targets afflicted by the player's

[Bane of Agony] or

In Legion, Summon Infernal was a standard AoE DPS cooldown available to all 3 warlock specializations, sharing a cooldown with the single-target oriented

[Summon Doomguard] ability. The Infernal (or the Doomguard) could instead be summoned as a permanent pet option with the talent

[Grimoire of Supremacy]. As a permanent pet, the Infernal possessed a threat-increasing aura, allowing it to replace the Voidwalker as the warlock's tank pet, and had a 1 minute cooldown AoE stun ability called Meteor. The Destruction warlock's artifact weapon, the

[Scepter of Sargeras], also had a trait

[Lord of Flames] that caused Summon Infernal to also spawn 3 smaller Infernal for 25 seconds, with a 10 minute cooldown on this effect (this was triggered instead by using the Infernal's Meteor ability with Grimoire of Supremacy talented), allowing Summon Infernal to be used even for single-target situations once every 10 minutes for Destruction warlocks.