“The time has come to shatter this clockwork universe forever! Let us no longer be slaves of the hourglass! I warn you: those who do not embrace the greater path shall become victims of its passing!”

The infinite dragonflight[2] (or simply the Infinites)[3] is a dragonflight formed from corrupted members of the bronze dragonflight. Their only goal is seemingly to destroy the one true timeway and to help the Old Gods bring about the Hour of Twilight.[4] Their reasons for doing so are not entirely clear, but it is hinted at that it is to stop an even worse fate.[5] The infinites are led by Murozond, the future corrupted version of the bronze Aspect Nozdormu.

"Following" the death of Murozond in the End Time, the remaining infinites decided to aid Kairozdormu, a charismatic bronze dragon disillusioned with protecting time, who wished to use alternate timelines to gain infinite power. Following Kairoz's death at the hands of Garrosh Hellscream, the status of the remaining infinites is unknown, though they have appeared a few times ever since. 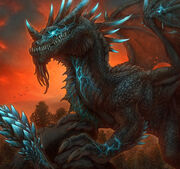 The infinite dragonflight is far more diverse than most denizens of Azeroth know.[2] All castes of this dragonflight, from whelp to dragonspawn to fully grown dragon and, oddly, even some juvenile cloud serpents[2] have been encountered. The flight tempted many drakonid with promises of power, but most found only servitude and despair.[6] The color range of infinite dragons varies from black to dark grey/gunmetal, with an oddly cracked and deteriorating appearance. They are covered with tiny black residual particles and a strange blue light glows through the cracks.

After the titans showed Nozdormu his own death, a tormented Nozdormu from the future was tricked by the Old Gods into trying to subvert his mortality.[7] The Old Gods' motivation in doing so was an attempt to erase Thrall from history, so that he would not be able to stop the Hour of Twilight.[4] As a result, Nozdormu (known then as Murozond, a creature out of time) shattered the timeways and created the infinite dragonflight, jeopardizing the very future of Azeroth[7] by trying to change past events.

During the events of The Burning Crusade, the infinite dragonflight under the command of Murozond appears in two of Caverns of Time instances, attempting to prevent crucial events in Azeroth's history from occurring. In Escape from Durnholde Keep, they interrupt Thrall's escape by kidnapping Taretha Foxton. If Thrall had never escaped from Durnholde, he would never have been able to rebuild the Horde, free his people from the internment camps and lead them in battle against the Burning Legion during the Third War. Thus, Azeroth would have been destroyed.[4]

In Opening the Dark Portal, the infinites attempt to prevent Medivh from opening the Dark Portal and allowing the Orcish Horde to invade Azeroth. While this would have prevented many deaths, it would also have caused the human nations to never band together to form the Alliance, and thus there would be no one to oppose the Burning Legion years later.

In Northrend, the infinite dragonflight can be seen fighting the bronze dragons "through time" for control of the Bronze Dragonshrine in Dragonblight. During

[75] Mystery of the Infinite, the bronze dragon Chronormu sends adventurers to the shrine in order to identify the leader of the infinites using a device known as the

[Hourglass of Eternity]. At the end of the quest, the hourglass finishes its search, revealing the long-lost Nozdormu. Chronormu states that this makes no sense, then brushes it off and says that she is glad that the Bronze Aspect is alive and well. She adds that he had left without telling the rest of the flight "where or when" he was going.

The infinites also appear in the Culling of Stratholme dungeon, attempting to disrupt the timeline by preventing Arthas Menethil from purging the city.

Murozond in the End Time.

After the Cataclysm, Occulus, one of the bronze drakes guarding the entrance of the Caverns of Time in Tanaris, became corrupted and turned into an infinite drake.

During the events of Thrall: Twilight of the Aspects, Nozdormu finally reveals himself to be the creator and leader of the infinite dragonflight to Thrall and the entire bronze dragonflight. He goes on to state that in a branching future, he becomes the "Master" spoken of by many infinite agents. His absence for a considerable amount of time was due to the investigation of his transformation causing him to become lost in the timelines and unable to return to the present moment due to the manipulations of the Old Gods.[4]

In order to retrieve the Dragon Soul — the only thing capable of stopping Deathwing — from the distant past, Nozdormu and a group of adventurers traveled to the End Time, a vision of what Azeroth in a distant future if Deathwing wasn't stopped. There, the anomaly preventing Nozdormu from accessing the past is revealed to be Murozond — Nozdormu's corrupted future self. After Murozond is killed by the adventurers, Nozdormu tells his mortal allies:

"At last it has come to pass. The moment of my demise. The loop is closed. My future self will cause no more harm.
Still, in the future, I will...fall to madness. And you, heroes...will vanquish me. The cycle will repeat. So it goes.
What matters is that Azeroth did not fall; that humanity survived to live another day.
All that matters...is this moment."

The infinite dragonflight made a surprising return during the trial of Garrosh Hellscream, provided to Warlord Zaela by Kairozdormu. They attacked the Temple of the White Tiger with the Dragonmaw clan alongside Thalen Songweaver, Harrowmeiser, and Shokia in order to free Garrosh from captivity.

Several Infinite Drakelings appeared during the fight against Elisande in the Nighthold of Suramar City.

[Reins of the Infinite Timereaver] has a chance to drop from bosses in Timewalking dungeons.

Very late in the Warlords of Draenor beta, an Infinite drakonid known as the Infinite Vanguard was found outside the Caverns of Time. Infinite Pesterwings could also be found inside and around the caverns. Meanwhile, a time rift like those the infinites have been known to use appeared above the sands of Tanaris between the Caverns of Time and the Gaping Chasm. They were all removed before the final version of the game.

The infinite dragonflight seems to have its origins in a faction of discontent bronze dragons that believes they should change history to create a better future, despite having lost the power to perceive the full impact these changes could have on the timeline. Kairozdormu was a member of this faction and was also able to call infinite dragons to aid the Dragonmaw in freeing Garrosh.[8]

A further piece of evidence is that shortly before Garrosh killed him, Kairoz proclaimed: "We will be limited by nothing. Not even time. The possibilities are infinite. I will become infinite—"[9]