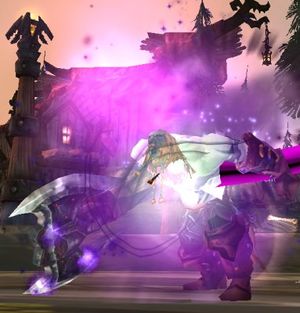 Ingvar the Plunderer is the last boss in Utgarde Keep. He directs the attacks on Valgarde from the balcony over the waterfall in Daggercap Bay. Under the command of Ingvar the Plunderer, the dragon riders revel in slaughtering their enemies from above without warning. He's known among both ally and enemy forces for his brute strength. His axe is duller than one would think; when close up, he relies on his brute strength to cut down foes.[1]

Ingvar is a "memory" in the fight against Argent Confessor Paletress in the Trial of the Champion encounter of the Crusaders' Coliseum.

Ingvar's brute strength is legendary even among the vrykul. Rumor has it that he once bested King Ymiron in a brawl. The truth is unknown, but purveyors of that tale usually don't live for a retelling. Ingvar has promised the Lich King that he'll use all measures of brutality to hold the keep, a promise that he dare not break.

Phase 1: In His Service

Phase 2: The Price of Failure

When Ingvar the Plunderer is killed, he is brought back to life by the Lich King's servant, Annhylde the Caller, as an undead slave.

Aggro
I'll paint my face with your blood!

Death
My life for the... Death God!

Resurrection
Annhylde the Caller yells: Ingvar! Your pathetic failure will serve as a warning to all... you are damned! Arise and carry out the master's will!
Ingvar the Plunderer yells: I return! A second chance to carve your skull!