This article is about the World of Warcraft ability. For the Warcraft III Priest ability, see Inner Fire (Warcraft III).

Inner Fire is a free instant Priest self-buff that increases the priest's armor gained from items by 60%, and increases spell power by 10%. Lasts until cancelled.

Inner Fire vs Inner Will 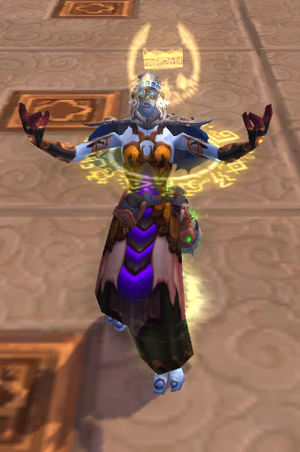 A troll priest casting Inner Fire in World of Warcraft.

[Inner Will] are mutually exclusive; the priest must decide which to have active at any given time. As both are free and last until cancelled, there is no reason not to have one of these abilities active at all times.

As Inner Will is not learnt until level 83, priests below this level should always have Inner Fire active.

Inner Fire provides an armor and spell power buff. This provides a very substantial improvement to the priest's defenses (increasing armor by 90% when improved with

[Glyph of Inner Fire]) and a reasonable boost to spell power, improving both damage dealing and healing.

Inner Will reduces the mana cost of your instant spells and increases your unmounted movement speed by a small amount. This makes it useful for priests who are concerned with their mana pool, especially those reliant on instants. The movement speed increase can be useful in a number of situations both in PvE and PvP, allowing the priest to outstrip pursuers or move within healing range of targets more quickly.

Inner Fire is therefore more directly beneficial to defense, healing and damage dealing; while Inner Will benefits mana-efficiency and movement speed. Priests above level 80 will have to decide which aspects to enhance at any given time. It is quite possible to change between the two buffs depending on the situation; as both are free to cast, the only cost is the use of a global cooldown to activate the chosen spell.

When Inner Fire is the priest's preferred buff, Inner Will can be used to quickly escape AoE effects, or move swiftly between targets, following which the priest may choose to re-activate Inner Fire. When time allows, priests can also activate Inner Will in anticipation of casting one or more instant spells, saving 15% of the mana they would spend. It should be noted that many instants (such as

[Power Word: Shield]) benefit from spell power, and so, although 15% cheaper when cast during Inner Will, will be slightly less effective than if cast during Inner Fire. Inner Will can also be very useful when carrying the flag in battlegrounds such as Warsong Gulch, although the priest may wish to re-activate Inner Fire should they come under attack. While many melee types will use snares, stuns or abilities such as

[Charge], the speed advantage of Inner Will can sometimes allow the priest to outstrip pursuers, especially when used following

When Inner Will is the priest's preferred buff, Inner Fire can be used in anticipation of taking damage (especially physical) or casting non-instant spells, taking advantage of its spell power buff.

The mages of Dalaran discovered a way to bring out the potential of the warrior’s fighting spirit and essentially wreathe them in their own spiritual energies. This has had the overall effect of making the Alliance warriors more resistant to damage and better able to deal damage.[1]

Despite the arcane origin of the spell, it seems its use has been adopted by priests.