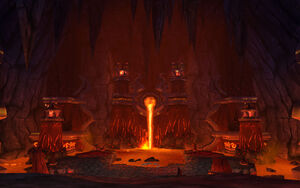 The Inner Spire is a hall within the Firelands where Ragnaros resides. The only way to access this area is through the flamegate at the northeastern shore of the Throne of Flame, also known as Sanctum of the Prophets, on Mount Hyjal.[55.6, 66.2]

[82] The Firelord. It takes their combined strength to banish him, but it was not enough and they agrees to confer with the leaders of the Horde and the Alliance for them to defeat him in his own home realm.