Innkeeper Belm is a level 30 innkeeper located in Thunderbrew Distillery in Kharanos, in the dwarven starting zone Dun Morogh. 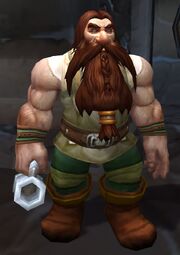 He is one of the few suppliers of

[Rhapsody Malt], one of the key ingredients in the Thunderbrew's famous family recipe

[Beer Basted Boar Ribs] and one needed to see him for

How to Win Friends

Belm and the gnome Lazlo Grindwidget seems to be friends. When a giant Frostmane troll was about to attack Kharanos, Belm convinced Lazlo to help town's dwarves in its defense. When the troll arrived and entered Belm's distillery, he asked Belm where is his stolen mojo. Just in time, Lazlo entered the distillery, distracted and defeated the troll. Belm was then seen cheering with other dwarves in honor to Lazlo.[1]

Shortly before the Shattering of Azeroth, Dun Morogh was hit by earthquakes and so was the town of Kharanos. With the help of High Priest Rohan, Anduin Wrynn, gnomes and a draenei shaman, Belm was one of the people rescued from the ruined Distillery. Unfortunately, Aerin, Anduin's guardian and friend, died beneath the ruins when an aftershock hit and destroyed what was left. Rohan acknowledged that the Distillery would be rebuilt.[2]

Some time after the Shattering, the building is shown to be whole again. Belm got a chance to sample an ale from Short & Stout Brewing Co.

He was present during the Legion Invasions.

Fill yer tankard and pull up a chair. We've stories to tell and kegs to empty.

What can I do at an inn?

When you stay at an inn, you rest very comfortably. because of this, you will become "well rested" much more quickly than you would in the wilderness. When you are well rested, you learn more from experience.

You may also speak with any innkeeper to get a hearthstone, and can later use the hearthstone in order to quickly return to that inn.