For scribes and the inscription profession, see Inscription. 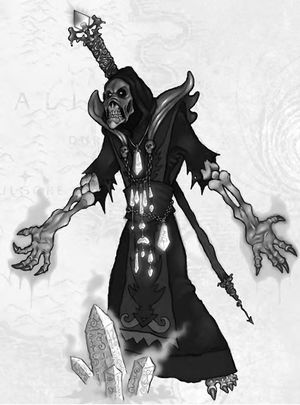 An undead inscriber from More Magic and Mayhem.

Scribes are probably practitioners of Inscription, vendors of materials and teachers. They are found across Azeroth and Outland and are mostly of draenei, blood elf, human, Forsaken, orc, gnome, pandaren and arakkoa race.

It is possible to build a Scribe's Quarters in Garrison of the alternate Draenor.

Inscribers in World of Warcraft

In World of Warcraft, inscribers can be found among the draenei (Inscriber Saalyn) and the blood elves (Inscriber Veredis). Both their names were changed to "scribe" in patch 3.3.2.

Inscribers are arcanists who have discovered the strange arts of rune-casting; a technique for channeling the arcane energy inherent in the world without the risk of arcane corruption. They are different than runemasters, for they pursue the arcane knowledge and spellcasting techniques of all arcanists; they seek to also add the powers of runes to their repertoire.

Runemasters look on inscribers with some measure of hesitation, for they are proof that there is a connection between the "pure" arts of runecasting and the more vulgar magics of the mage, warlock and necromancer. In the meantime, inscribers seek out runemasters to teach them new runes, as well as written works that describe the power of the rune patterns. Also unlike runemasters, inscribers are more likely to use runes to enhance their companions and their possessions; whereas runemasters focus on developing a personal connection to the world's natural magic, and tend to scribe runes predominately on their own bodies.

Inscribers still use spellbooks, though these spellbooks may contain impressive formulae for channeling the power of runes that other arcanists can't make heads or tails of.

An inscriber has the ability to create and empower runes. Unlike the runemaster, he does not learn whole patterns; instead, an inscriber may prepare individual runes as though they were arcane spells. He keeps runes in his spellbook, just like other arcane spells.[1]

Inscribers are most often found among humans and gnomes, for these two races are most likely to have arcane aptitude as well as exposure to runic magic (usually through association with dwarven runemasters); some forsaken who have dealt with tauren runemasters have come to seek these secrets, as well.[2]

In World of Warcraft, one who takes on the Inscription profession is not intrinsically an inscriber; such a person is properly referred to as a "scribe." Specifically, an inscriber is a variant of the broad "arcanist" core class, as is the mage, the necromancer, and the warlock. While scribes employ a degree of knowledge concerning rune magic (as evident by their creation of glyphs), they are not themselves versed in the secrets of rune-casting and rune-channeling in the unique way that inscribers are.