From Wowpedia
(Redirected from Instances)
Jump to: navigation, search 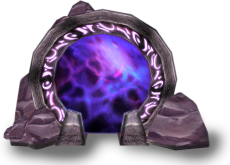 Major hostile areas like dungeons, keeps, and other confined areas can have sub-areas called instances (aka instance(d) dungeons). These instances are special areas in the World of Warcraft where your group or raid party is able to interact with a dungeon privately; that is, without interference from other parties or raids. It is also a respite from the global PvP environment on a PvP server. The term instance is often conflated and interchanged with the term dungeon.

Instance dungeons tend to feature the most difficult and rewarding content, both in terms of enemies and items, but also in terms of level design. Most mobs inside the instance are elite, with the exception of some mobs, and perform well above their level. Instances usually feature multiple bosses, all with special abilities and immunities. Getting through an instance normally requires a well-trained and well-balanced group of players who are of an appropriate level for the challenge.

Lower level instances can be soloed by a higher level character. While an interesting challenge, the drops will not be particularly useful anymore. (although you could just sell the items you get, or trade the non-soulbound ones to players who need them and have gold to pay for it)

Instances are often farmed for gear by having a high level character take a low level character through the instance; either a friend or for a fee. Boss drops typically BoP, so the lowbie has to be present.

The lower character is going to get a lot of XP in the instance. If building a twink you will need to plan for this; start farming as soon as you are able and be selective which instances you farm. XP is not your friend (twinks); you want as little as possible so that you can continue to farm without dinging past your goal level. You should focus on specific gear and bypass kills you don't need. Note, however, that this is less of an issue since patch 3.2 and the ability to turn off experience completely. Whereas formerly creating a twink took careful planning of gear attainment and experience gain, the main limiting factor now is initial experience gain to the desired level.

Because instances are in effect separate from the actual main World of Warcraft maps such as Eastern Kingdoms, Kalimdor, Outland, and Northrend, much like the Battlegrounds, players too are literally moved from one part of the map to an artificial creation of the main map sections. However this is not to suggest that Blizzard did not go to the effort of re-creating instance geography and terrain within the main maps. Areas like Zul'Farrak are fully constructed within Tanaris though it is impossible for players to enter this area without any way to climb or fly over the hills. This is a rarity since in order to save processing power and make the world smoother to run without rendering useless features that no one would ever see, Blizzard creates a "false" portrayal of the instances such as Shadowfang Keep where only what the player sees is worth rendering. Another difference worth noting is that within instances, the corpses of boss characters will remain intact for 1 hour to ensure that players do not miss out on loot.

A player can only enter ten individual instances in one hour. This even applies to the same instance when a player uses the Instance reset ten times within an hour, because each reset is considered by the game to be a different instance. This applies to all characters on an account, as logging into a different character and trying to enter an instance brings the same message. The intention is to limit, but not stop, instance farming. You can, however, still queue for random instances in the Dungeon Finder while under this limit, and if you cannot enter the instance you found due to the instance limit you will not be given a Deserter debuff if you leave the group.

This does not apply to simply walking into or out of an instance. A player may enter or exit an instance as many times as they like or need as they play through provided they do not reset it.

Instances are hosted on realm servers. For load balancing purposes, an instance's server will often be that of a realm that isn't home to anyone in the group, as indicated by the server time zone. If too many members of a raid have high latency, resetting the instance may help by moving it to a different server.

The fact that a limited number of instances could run at a given time on a server caused problems in 2009, but this was solved with the introduction of the Dungeon Finder in December of that year.

The overworld includes a small area behind the instance entrance. For some 5-player dungeons, such as the ones in Icecrown Citadel, this is a copy of the first hallway except that it dead-ends after the first turn (if one pays attention, nearly all instances have a turn or obstruction near the instance for this reason). Crossing the instance entrance (even with an ability such as

[Blink]) automatically attempts to transfer you to the instance, but the attempt can fail -- placing you in this area -- in the following situations:

These are instances located in the capital city for each faction (Ragefire Chasm in Orgrimmar and Stormwind Stockade in Stormwind), and as such it used to be very difficult for opposite faction characters to get to the entrance at an instance-appropriate level (about level 15 for Ragefire Chasm and level 25 for Stormwind Stockade) without the help of other max level characters. However, if they get there, they can enter through the portal. Since Patch 3.3.0 appropriate level characters can use the Dungeon Finder feature to gain access to these dungeons, regardless of faction.

There is an achievement called Classic Dungeonmaster which requires doing both of these. Unless the character used the opportunity to complete them at the appropriate level through the Dungeon Finder, this would typically be done at near max level or with the help of others at max level. While the instance will be trivial, getting in will not be. A group of max level characters can race past the guards. Fighting your way in is an option, but you are then essentially raiding the opposing capital, so be prepared. Rogues or druids can stealth in; and there are summoning stones near the entrance, so a small stealthed group can summon others. However, with the release of Cataclysm, flying was introduced to Eastern Kingdoms and Kalimdor with an additional license which makes these dungeons easier to reach while also avoiding majority of the guards. Since patch 7.3.5, flying in Eastern Kingdoms or Kalimdor is no longer required to buy the additional license.

Introduced with patch 8.1.0, Battle of Dazar'alor is the first raid to be more faction specific when it comes to the encounters.