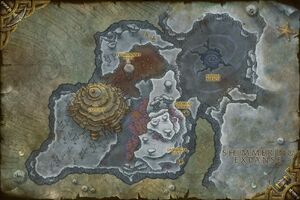 Go'el must be in the plane of water... the Abyssal Maw itself! I shudder to imagine what fate awaits him there.

Find the elemental, Hydrius, near the Abyssal Breach. He knows of Go'el and is sympathetic to our fight against Ragnaros. If anyone can help you there, it's him.

I will meet you beneath the tides of Vashj'ir, <race>...

I can only teleport us once. Make sure you are ready. Go'el waits for us at the bottom of the ocean...

Aggra, I'm ready to travel to the Abyssal Maw.

Aggra will teleport herself and players to the southern lip of the Abyssal Breach in the Abyssal Depths. Players, whether or not they completed enough of Vashj'ir to gain

[Sea Legs], have it for the duration of their time in the depths during these quests.

Aggra says: The water here is disturbed... what is happening here?
Hydrius says: Greetings, travelers. The tides of destiny have brought you far from the bright world above. I know what it is you seek - and it lies there before you...
Hydrius says: Your world-shaman has become a vortex of longing and desire. See how his heart devours everything within its proximity? Tread lightly, traveler. lest you too, be consumed.
Aggra says: We arrived just in time! Go'el's spirit has become so unstable, it could collapse upon itself if we don't act fast.

Hydrius says: Your world-shaman is already lost to the dark fathoms. He exists now only to consume - tortured by the currents of life he longed for - but never knew.
Hydrius swims off.