Into the Realm Eternal (WC3 Undead)

Into the Realm Eternal is chapter 3 of the Path of the Damned campaign.

It accounts for the events in which Arthas, aided by the ghost of Kel'Thuzad, begins the siege of Quel'Thalas in his quest to reach the sunwell and revive the former necromancer.

Six days later, near the forested borderlands of Quel'Thalas... 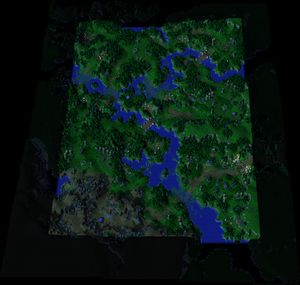 Arthas, having slain Uther the Lightbringer under orders from Tichondrius, gains possession of the Urn of King Terenas. He uses the urn to preserve the already decaying remains of Kel'thuzad to be revived at their chosen "nexus of powerful ley energies", the high elves' Sunwell.

In order to march upon the high elves' capital of Silvermoon, you must shatter the magical, heavily guarded Elfgate that protects the heart of their forested lands.

Arthas and Kel'Thuzad survey the woods of Quel'Thalas from atop a cliff.

Arthas: Ah, wondrous, eternal Quel'Thalas. I haven't been here since I was a boy.

Kel'Thuzad: Be wary. The elves likely wait in ambush.

Arthas: The frail elves do not concern me, necromancer. Our forces are strengthened with every foe we slay.

Kel'Thuzad: Don't be too overconfident, death knight. The elves must not be taken lightly.

Arthas: We shall see. Bring forth the prisoner.
Two Ghouls escort a high elf Priest in front of Arthas.

Arthas: Where is the entrance to your land, elf?

Priest: You will never enter Quel'Thalas, fallen prince. The woods themselves protect our borders, and the enchanted elfgates protect our capital.

Arthas: Your precious gates will not stop me any more than these trees, elf. Bring up the meat wagons! We'll make our own entrance.
The Meat Wagons destroy some nearby trees, creating a path to a small high elf base.

Kel'Thuzad: The energies of this place are strong. Kill the elves! Level their structures! This location is perfect for your base.

Arthas: It'll be a pleasure.

High Elven Ranger: The undead are advancing! Alert the sentries!

Arthas: It is you who should turn back, Sylvanas. Death itself has come for your land.

Sylvanas Windrunner: Do your worst. The elfgate to the inner kingdom is protected by our most powerful enchantments. You shall not pass.

Sylvanas Windrunner: Summon the reinforcements! We must hold them back!

Sylvanas Windrunner: Shindu fallah Na! Fall back to the second gate! Fall back!

Arthas: The elfgate has fallen! Onward, my warriors! Onward to victory!

Arthas begins his conquest of Quel'Thalas by ordering his minions to capture a local in the woodlands surrounding the outer elfgate. Arthas interrogates his prisoner concerning entry to the inner kingdom. The stubborn high elf insists that the "fallen prince" will not be able to enter their land, citing that not only their gates will protect their capital, but the enchanted forests as well. Arthas is not in the least bit moved by his prisoner's confidence, as he has come prepared with crude meat wagons to aid him in clearing the trees to create a path leading to the elfgate.

While the meat wagons clear a path, Arthas and his forces destroy a small settlement guarded by elven rangers who were caught by surprise. The Undead Scourge mercilessly slaughtered any elf who tried to defend their land. Having successfully obliterated a high elven town, Kel'Thuzad advises Arthas to construct a base on the site, as he senses that the energies of this place are strong. As he instructed his acolytes to begin haunting the gold mine and summon structures to supplement their war effort, the undead forces are met with more elven defenders, this time led by the Ranger-General of Silvermoon, Sylvanas Windrunner. The couragous elf threatens Arthas to withdraw his forces, lest they taste the wrath of the high elves. Yet again, Arthas is unfazed by the elf woman's words, and he continued to fight until the elves were pushed back.

Once Arthas' undead bastion was in full operation to add to his forces' already growing numbers, Arthas took his army deeper into the woods. There, he is met by Sylvanas and her forces again and again. However, as often as they attacked, so too were the undead able to push them back. Deeper into the fabled enchanted forests of Quel'Thalas, the undead were also greeted by its wildlife and other sentient inhabitants, whom they thought were also rising up to halt their invasion. Just as any elf though, Arthas and his loyal minions killed and raised them alike.

As the undead advanced, the outnumbered high elf forces retreated deeper and deeper towards the outer elfgate. The army of the dead overwhelmed each and every one of the defenders' hamlets. The weary elves soon realized that everytime one of their own falls, the forces of their adversary grow. Though this did not stop the Elven Ranger Corps, they too soon fell and along with their leader, Sylvanas Windrunner, watched as the undead under Arthas' command destroy the outer elfgate. Sylvanas, though knowing that she had failed to protect the outer elfgate, recalled her troops to fall back to the second gate. Sylvanas admits defeat at this gate, but she confidently told the Death knight that he won't get through the second. The mission ends with the undead claiming victory at the fallen elfgate.