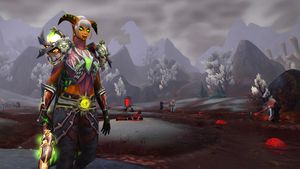 Invasion Points (or Argus Rifts) are worlds targeted by an invasion of the Burning Legion. The portal network on Argus allows adventurers to access them, using riftstones from Kil'jaeden's ship. The goal is to clear out the Legion invasion force, fight a boss, do an event, and complete an objective.

There are two tiers of Invasion Points that will not only increase in difficulty, but also increase in rewards—and you'll need to bring along extra help if you want to complete the highest tier.

Several Invasion Points will be available on Argus at any given time along with one Greater Invasion Point. The portals into these encounters will be visible on your world map and each player will need to click on the portal to enter (even when in a group.) Each Invasion Point will cycle within a couple of hours and despawn, so you'll want to keep an eye on the timers indicated on your map. You and your party will face some additional challenges from location to location, whether it's contending with the extremes of cold or playing in fire. Completing these Invasion Points will provide Argus Waystones which can be used toward earning a weekly reward.

Greater Invasion Points will provide access for you and your raid to one of the new World Bosses and the chance to get some great loot starting at ilvl 930. If you don't have a raid at your beck and call, there's always the Group Finder (I) where you're sure to be able to recruit some heroes to join you. Bosses will only award loot once per week. The invasion points provide a certain degree of variation to Argus and allows players to see some different settings.[1][2] 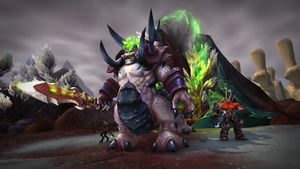 From its stronghold on Argus, the Legion employs a vast array of portals to spread across the cosmos like a plague. Countless worlds have been plundered for resources, their inhabitants forced to serve the Dark Titan or endure a slow, agonizing death.

Unless these worlds can be liberated, the Burning Crusade will consume everything it touches and leave the universe in ashes.

A planet composed of floating islands with seemingly nothing but clouds beneath them. There are mysterious temporal anomalies on the islands.

Stage 2 – Push Back the Legion

A Firelands-like planet, with lava and molten rock. The fire elementals here are being corrupted by the Legion.

Stage 1 – Scattered to the Winds

A Sethekk Hollow-like planet, with bones and and a lake of blood. When Legion Blood Drainers are destroyed, something stirs beneath the surface. Occasionally tentacles will erupt out of the ground as well.

A Frostfire Ridge-like planet, but without lava. The Illidari also assaulted it.

Stage 1 – Scattered to the Winds

Previously had no level restriction, enabling low-level characters with

[Wormhole Generator: Argus] to use Invasions Points for leveling. The toy was also adjusted.