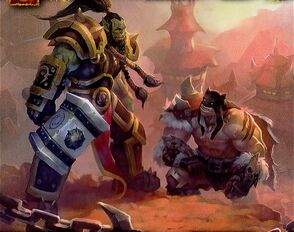 The invasion of Durotar was a conflict between the Horde and Kul Tiras.

The invasion is chronicled in The Founding of Durotar campaign in Warcraft III: The Frozen Throne.

Following the victory at Mount Hyjal and the defeat of the Burning Legion,[2][3] Warchief Thrall gathered his people and resolved to find a place for them in the rugged, beautiful lands of the Barrens. Thrall led his orcs into the battle against the Razormane quilboar and claimed much of the land,[4][5] founding Durotar, named after his heroic father.[6] Its capital city was Orgrimmar, named for Orgrim Doomhammer. After many months, things began to pull together. The orcs were fleshing out Durotar,[7] the tauren had gone into Mulgore,[8] and the trolls had settled on the Echo Isles off the coast.[9]

The Human Expedition under the command of Jaina Proudmoore established themselves within Dustwallow Marsh and name their new nation Theramore. Thrall and Jaina signed a nonaggression pact with one another as well.[10]

Unbeknownst to Jaina, her father Grand Admiral Proudmoore was leading Kul Tiras forces on an expedition to Kalimdor in order to search for his daughter and the survivors that fled there after Lordaeron fell to the Scourge. Unaware of his daughter's nonaggression with the Horde, Daelin discovered the orcs and began raiding the coast and assaulting orcish settlements, determined not to let the orcs gain a foothold in the new continent.

Kul Tiras forces ended up driving the local thunder lizards out of Thunder Ridge with their lumber operations and, upon being discovered, reported the Horde presence to the Admiral. Unaware that the forces they encountered did not belong with Jaina, Rexxar the mok'nathal, Rokhan the Darkspear troll shadow hunter, Chen Stormstout the pandaren brewmaster, and far seer Drek'Thar were forced to cull the thunder lizard population in accordance as destroying the lumber mill would break their nonaggression pact with the humans. After their task was done, they reported the incident to Warchief Thrall who ordered them to investigate sightings of humans on Durotar coast and confessed that he was unsure as to what Jaina was doing.

Rexxar and his companions discovered that an invasion force was in place and thus hurried to Orgrimmar to report their findings to Thrall. Even as Thrall requested Rexxar and his companions to deal with the humans, Kul Tiras forces launched a devastating attack on an orc outpost leaving Gar'Thok the only known survivor. Upon finding the outpost destroyed the Horde force were able to use the humans' tracks back to the coast and slew them. After reporting to Thrall, the Warchief remarked that he recognized the anchor symbol displayed by the Alliance forces but was unable to place it. Both Thrall and Rohkan recognized that the Kul Tiras fleet would target the Darkspear Trolls, and thus Rexxar and his companions journeyed to the Echo Isles. The Horde rallied under Rexxar and Darkspear Chieftain Vol'jin and evacuated the Darkspear tribe to the mainland.

Returning to Thrall, Rexxar and the others learned that the human leader had invited Thrall to meet in Razor Hill for parlay. Distrustful of the humans, Rexxar convinced Thrall to let him go in his place. During the parlay, the Kul Tiras Emissary recognized that Rexxar was not the Warchief and seemed to be mystified as to why Rexxar would think that Jaina would be involved. Before Rexxar could question him, the trap was sprung. Though Rexxar and his companions were victorious, the Emissary ominously reported that the Horde had no idea what was coming for them.[11] 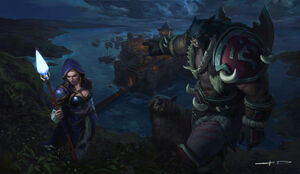 Jaina and Rexxar outside Theramore

Thrall suspected that deceit was afoot and prepared a letter for Jaina in the hopes of mending the problem, then sent Rexxar to meet with her on Theramore Island. Rexxar and his party asked Samuro, a blademaster, to plant explosives to distract the guards of the human coastal settlement on Dustwallow Marsh long enough for Rexxar to slip by. However, Samuro remembered his previous mission to eliminate an enraged wildkin named Bloodbeak who was hiding nearby, and thus had to complete it before going for the humans. Rexxar then met with Jaina, who denied any knowledge of this force and condemned any attack on Thrall. She demanded to see these soldiers for herself.

Rexxar brought Jaina back to the camp only to find it destroyed by the naga. Rexxar and Jaina fought through the force of snake-people looking for any survivors. After finally defeating the naga, led by the naga sea witches Lady Darkscale and Scilla Murkshadow, they found a single human footman dying who said that the "Admiral" would be pleased to see Jaina safe.

Rexxar was confused at Jaina's horror but trusted her enough to follow her back to Theramore quickly. Upon arriving, however, a fleet of ships arrived and Jaina's father, Grand Admiral Daelin Proudmoore, arrived. The moment he saw Rexxar, he immediately ordered his capture, despite Jaina's pleas. Rexxar and his friends fled the city, fighting through the naval guards, and returned to the Darkspear village informing Vol'jin what had passed.[12]

Vol'jin made it out to inform Thrall of the imminent invasion and suggested that Rexxar go and enlist the aid of the tauren tribes along the mesas of the land of Mulgore to aid them in the coming battle. Rexxar traveled to Mulgore to meet with Cairne Bloodhoof. When he arrived, Cairne told him to return to Thrall and tell him that he had died of a broken heart. His second, Tagar, explained that Cairne's son, Baine Bloodhoof, had been kidnapped by centaurs and that Cairne had since grown depressed and lethargic. Rexxar led an expedition to rescue Baine with the help of the tauren spirit walker leader, Bovan Windtotem. Upon returning, Cairne was re-energized and agreed to pledge his people to the Horde and to personally return with Rexxar.

When they returned to the Darkspear village, Vol'jin showed them a tired ogre who had come from Dustwallow Marsh with news that a new warlord had taken over the Stonemaul clan of ogres, and that his cruelty and brutality were leading the ogres to ruin. Vol'jin and Rexxar agreed that this was an excellent opportunity to sway the ogres onto their side. Rexxar traveled to Dustwallow Marsh and found the Stonemaul clan. Though they initially rejected Rexxar because of his mixed blood, he proved himself by running a gauntlet and returning alive. Warlord Kor'gall was impressed and allowed Rexxar to join the clan.

Rexxar used his new position to ask the ogres for assistance. Kor'gall mockingly reminded him that they were no longer friends to the orcs. Rexxar was forced to fight Kor'gall for the leadership of the clan. Kor'gall proved to be a powerful foe, and Rexxar had to rely heavily on his beast friends to defeat him. Finally, Kor'gall fell and Rexxar assumed the position of chieftain. He then led the Stonemaul ogres back to Tidefury Cove where Thrall was assembling the Horde. Thrall named Rexxar Champion of the Horde and gave him the honor of leading the Horde against Proudmoore's forces. After a difficult battle, they razed Proudmoore's stronghold and sent the Admiral into a retreat. Yet, Thrall knew that Proudmoore would not stop there.[13] 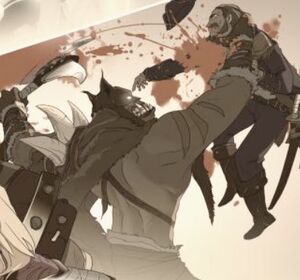 The death of Daelin Proudmoore, as remembered by Jaina.

With his companions Rokhan the troll shadow hunter, Chen Stormstout the pandaren brewmaster, and Cairne Bloodhoof the tauren chieftain, Rexxar landed on the outlying island and defeated the Kul Tiras forces who were occupying the island. Having gained the shipyard, the orcs quickly put the goblins to constructing juggernaughts and frigates, with which they then engaged the Kul Tiras armada. A furious battle on the waves ensued. The Kul Tiras forces used their fortifications and siege weaponry to shell the orc ships as they traded cannon fire with the human fleet. Although they were successful in destroying a good many of the goblin-made ships, Rexxar's forces were eventually able to sink all six of the Kul Tiras battleships, forcing the remains of the fleet into disarrayed retreat. With the blockade broken, Thrall quickly ordered his troops onto waiting transports, and began the invasion of Theramore Isle.[14]

The gathered armies of the Horde, led by Thrall and Rexxar, landed upon Theramore Isle and unleashed their full fury upon the walls of the city. The Horde launched a three-pronged attack: the trolls and ogres attacked from the west, the tauren attacked from the south, and the orcs attacked from the southwest. They met stiff resistance in the form of Admiral Proudmoore's elite guard, Theramore's powerful automated defense towers, and Jaina Proudmoore's own forces. The Alliance forces defended the Citadel fiercely, fighting with an intense hatred for the Horde whom they believed to be the same as the one that ravaged their homelands and many warriors on both sides perished. Their counter-attacks overran several Horde landing sites but finally, Rexxar and his companions were able to fight their way through the heavy melee, defeating the Admiral's personal guard before engaging Daelin Proudmoore himself. Although Proudmoore was a ferociously powerful warrior and sorcerer, he was finally slain in the epic battle with Rexxar's party. With the Admiral's death, Rexxar ordered the rest of the Alliance forces to stand down. Jaina Proudmoore materialized, to mourn over the body of her proud, stubborn father.[15]

Having no quarrel with the remaining humans, the Horde returned to Durotar, leaving Jaina Proudmoore and her isle in peace. Thrall offered Rexxar a champion's welcome at Orgrimmar, which Rexxar refused, saying he was a lone wanderer at heart. However, the half-ogre considered himself as part of the Horde ever after and is at Thrall's service should the Warchief ever call upon the beastmaster's considerable talents again.

Bloodhoof returned to Mulgore to rule over his own people, but it is not known what happened to Rokhan and Stormstout.

Most of the survivors of Daelin's fleet eventually sailed back to the Eastern Kingdoms. When the people of Kul Tiras learned of their Lord Admiral's death, they cried out for vengeance, but the other nations of the Alliance were not interested. Ordeals caused by the plague in Lordaeron were more immediate concerns, and the other allied leaders also had little pity for Daelin's own aggressive actions. The people of Kul Tiras furiously isolated themselves from the rest of the Alliance but were not angry with all of the Alliance leaders. They instead nursed a bitter hatred only towards Jaina for betraying her family.[16]

Rufus Montaine, servant of the Proudmoore family participated in the event and died. Following the battle, Jaina and Thrall went into the city and found the deceased soldiers, one of them being Rufus who Thrall remembered from Durnholde Keep.[19] Although Jaina and her loyalists were spared, much of Theramore was left in ruins.[20]