The Invasion of Kalimdor is the Orc Campaign in Warcraft III: Reign of Chaos.

After escaping human captivity and fleeing to the shores of Kalimdor, the orcish warchief Thrall must lead his brethren to safety and ensure their survival in this strange and hostile land. With the help of the tauren, a nomadic group of Kalimdor natives led by Cairne Bloodhoof, Thrall and Grom Hellscream head north to the Ashenvale forest, but during their journey, Grom Hellscream accepts demonic corruption to gain enough power to defeat the night elf demigod, Cenarius. Thrall is forced to go to great lengths to save him and face the very demon that has cursed his brother. He also discovers that his fate is to help repel the Burning Legion, and allies his forces with the human leader Jaina Proudmoore to accomplish this goal, going against generations of prejudice. 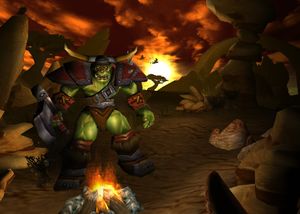 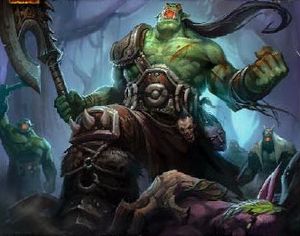 The Invasion of Kalimdor.