This article is about the horse. For his mount version, see

Invincible was the steed of Arthas Menethil, both in life and death. He was the skeletal steed that Arthas rode throughout Warcraft III: Reign of Chaos and Warcraft III: The Frozen Throne. 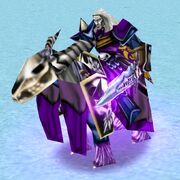 Arthas and Invincible from The Frozen Throne.

Invincible was born to the mare Brightmane on the Balnir Farmstead in Tirisfal Glades, in the winter of the year Stormwind fell. Prince Arthas, then nine years old, was present when he was born, and was given the horse by the Balnir family, who bred horses used by the royal family. The horse had a white coat, different from the usual Balnir stock, which normally had gray coats. Arthas had considered naming the horse "Snowfall" or "Starlight", but in the informal tradition of Lordaeron knights and nobles naming their steeds after a quality (Uther's was "Steadfast", King Terenas' "Courageous"), he named the colt "Invincible".[1]

Ten years later in winter, before Arthas was inducted into the Knights of the Silver Hand, Arthas' exertion in the numbing cold resulted in a crippling injury to his beloved Invincible. Too far from help and unable to heal the stricken horse, Arthas was forced to kill him in order to relieve his pain. He was buried on the grounds of the Balnir Farmstead at Arthas' request. Invincible's death was one of the events that inspired Arthas to become a paladin.[2]

After the fall of Lordaeron years later, Arthas - now a death knight - ran directly from Lordaeron after murdering his father, to the Balnir Farmstead where Invincible was buried. With the power of Frostmourne, Arthas resurrected the horse as his undead steed.[3] Now fully living up to his name, Invincible could become a spectre and disappear, to be resummoned by Arthas at any time.[4]

During the Scourge's siege on the Sunwell, Anasterian Sunstrider confronted Arthas in single combat, severing Invincible's forelegs with his runeblade,

[Felo'melorn], to dismount him. Witnessing Invincible's injuries brought on a surge of memories and sent Arthas into a rage, during which he shattered Felo'melorn and struck down Anasterian. This time, however, Arthas was able to necromantically repair the injuries. It is likely that Invincible served as his master's steed, even after Arthas became the new Lich King, though Sindragosa has also been referred to as his mount.

Following Arthas's defeat, Invincible's saddle was lost beneath Icecrown. During the Burning Legion's third invasion, it was taken by the knights of the Ebon Blade.[5]

In World of Warcraft, Invincible's empty grave can be found at the Balnir Farmstead in Tirisfal Glades:

Loyal and great of heart in life, may you find peace in death.

The open grave was introduced in patch 3.0.2, Echoes of Doom, but went unnoticed until just before the Zombie Infestation phase of the Scourge Invasion, which heralded the release of World of Warcraft: Wrath of the Lich King. However, Arthas: Rise of the Lich King indicates that the grave had already been open for several years.

When defeated on heroic difficulty in 25-player mode, the Lich King has a small chance to drop Invincible as a flying mount called the Invincible Charger.[6]