This article is about the mage ability. For the invisibility mechanic, see Invisibility (mechanic). For the Pet Battle ability, see

— TCG: Invisibility (Servants of the Betrayer)

[Stealth]. It is primarily used as an escape mechanism, a limited offensive tool, or as an ability to skip content.

Three seconds is the length of time it takes a mage to fade to complete invisibility. The spell cast itself is instant, which means the mage can cast it on the move, but the mage will only become invisible 3 seconds after casting the spell. Casting it applies a self-buff that shows the player the countdown. Every second for which Invisibility is counting down, the mage will lose threat, however, if they chooses to end the fade prematurely, they will lose a minimal amount of threat. Once the timer hits 0, the mage gains full invisibility, and is removed from combat.

Since 4.0.1, invisible Mages can see other players, although they cannot see other invisible mages (unless party members).

Invisible mages can generally only be seen by party members, but various buffs and abilities can allow them to be seen, such as

[Vendetta]. Invisibility differs from Stealth in that invisible units cannot be discovered by enemies without using special detection effects, regardless of proximity or level. However, AoE damage will still reveal them.

Coupled with Ice Block AND

[Invisibility Potion], it can provide a 48 seconds long period of complete untouchability, invaluable for PvP situations and avoiding battles in PvP servers. Thus, the timing must be perfect.

The Invisibility effect will remain intact when the Mage receives beneficial actions (heals, blessings, buffs) from external sources, such as a party member.

If you pull more enemies than you can handle at once, try to

[Frost Nova] them in place and cast

[Blink] first, THEN cast Invisibility after. Assuming that the mobs don't attack you with a ranged attack you can "reset the fight" and run to a safe location, saving yourself from corpse running, durability damage, and a repair bill.

In raids, while Invisibility can completely dump all your threat, it should be used if at all at the very beginning of the fight after offensive cooldowns (

In PvP or PvE encounters you can use Invisibility to remove yourself from combat allowing you to grab a quick food or drink and replenish your health and mana. Be mindful of the fact you're not DPSing while doing so, and only do this if it is critical.

This is the ability to cloud the perceptions of others so that they do not recognize the physical existence of the caster. This was originally employed as a tool to make the confessing of secrets that weighed heavily upon the souls of worshippers easier to speak. The clerics of Northshire Abbey have found it very useful in assisting the armies of King Llane in ridding Azeroth of the Orcs.[1]

Gleaned from sacred tomes rescued from the debris of Northshire Abbey, this spell grants the ability to cloud the perceptions of others so that they cannot perceive the physical existence of the caster's target. The individual that is rendered Invisible may not perform any tasks such as attacking, harvesting or spellcasting. Should the individual interact with his environment in any fashion more aggressive than simple movement, the Invisibility will be dispelled and their personage shall be revealed.[2]

This form of illusion has come back into widespread use since the days of the Second War. It creates a magical field around a person that does not impede the passing of light. Thus, normal people simply see directly through the invisible person. However, any attempts to attack or cast spells while invisible will cause the invisibility to dissipate.[3] 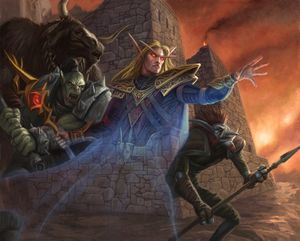