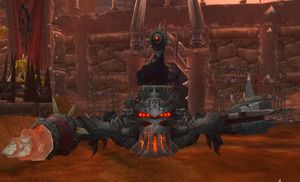 Iron Juggernaunt in the raid.

Iron Juggernaut is the sixth boss of Siege of Orgrimmar. Created by Siegecrafter Blackfuse, this robotic scorpion guards the gates to the city of Orgrimmar. After it destroys the Darkspear Rebellion's siege weaponry and reserves, the players must destroy the Iron Juggernaut to allow the rebellion into the city.

This mechanical terror, designed nearly as much for intimidation as destruction, is the centerpiece of Garrosh's siege weaponry. Crafted in the image of the mighty Kor'kron war scorpion, the Iron Juggernaut guards the gates of Orgrimmar, crushing any who would rise up to challenge Garrosh's True Horde.

This boss was the product of a particularly rowdy brainstorming session. We started with the idea of a siege tank. We ended up with a mecha-scorpion with a laser-mounted tail, flamethrower mouth, a drill and a sawblade for arms, and many, many cannons. We owe the artist who brought this monstrosity to life a drink or three.[1]

The Iron Juggernaut gathers energy as it assaults players with an array of cannons, lasers, and explosive attacks. Upon reaching full energy, the Juggernaut engages its Siege Mode, digging its claws into the ground and becoming sessile while employing new countermeasures. The Juggernaut cycles between these two phases until defeated. 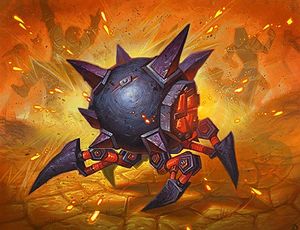 A burrowing crawler mine in Hearthstone.

At the pull, the tanks should position the boss in an area with enough nearby obstacles to mitigate the effect of Shock Pulse in Phase 2.

[Time Warp] is best used on the pull, since all players will have their cooldowns available and the phase is less movement intensive than Phase 2.

Tanks need to face the boss away from the raid, and from each other, as Flame Vents is a cone attack. The off-tank should initially taunt when the current tank has 2 stacks (which then gives the current tank ample time to get into position for stomping Crawler Mines), and thereafter swap each time the Crawler Mines have been dealt with.

The Crawler Mines will spawn at set intervals (approximately every 20 seconds) in groups of 3. Once they root themselves into the ground, they begin a timer; if the timer runs out, the mine will do high raid-wide Physical damage. To prevent this damage, a designated player needs to run to melee range of the mine and click on it, but the trade-off is an extremely high amount of Physical damage (1.25 M), and a knock into the air (resulting in additional fall damage). As the damage is Physical, the off-tank at the time that the Crawler Mines spawn is always the ideal player that should stomp on the mines, although other players with immunities or high damage reductions (examples being

[Dispersion] and so forth) can help the off-tank out whenever their immunities or high damage reductions are off cooldown. Letting one mine through is not problematic provided that the raid is topped up, but missing two will take out players with less health, and missing all mines will basically wipe the raid.

All DPS and healers should position behind the boss, keeping at least 8 yards apart from each other due to Mortar Cannon (for which players targeted will have to move). Players will also need to move from Borer Drill, and healers will have to heal the unavoidable damage from Laser Burn.

After 2 minutes, the boss will immediately transition into Phase 2.

Iron Juggernaut will remain rooted in place for the entire phase, and does not need to be tanked. The boss continues to use Crawler Mines, so both tanks should handle the mines together and, when no Crawler Mines are active, contribute to DPS on the boss.

Shock Pulse is the most problematic ability. Players will need to make sure that they have an obstacle a short distance behind them while remaining within range of the boss, so that they do not get Shock Pulsed all the way to the Eastern Kingdoms. Getting knocked back too far away from the rest of the raid can (and will!) result in deaths due to being out of range of healers, and Crawler Mines running off to Stormwind (making it impossible for the tanks to stomp them in time).

The raid will need to spread out at least 6 yards from each other to minimise damage from Demolisher Cannons. Players will also need to avoid the Explosive Tar void zones and, if targeted by Cutting Laser, kite the laser beam well away from Explosive Tar (if the beam contacts the tar, the raid will likely wipe).

Healers will be under considerable pressure to keep the raid up due to high unavoidable AoE damage from Seismic Activity, and should chain defensive cooldowns.

After 60 seconds, the boss will immediately return to Phase 1. Continue to cycle through both phases until the boss is defeated.

Achievement: Fire in the Hole!

The trick is to position on one side of the boss until the Explosive Tar gets thrown, then run through to the opposite side of the boss in preparation for Shock Pulse. Shortly after the knockback, the mines will spawn -- the raid needs to quickly stack up just before the mines spawn, then move when the mines have rooted themselves. If done correctly, the mines will be in roughly the same place, making it easy for the Cutting Laser to be kited over them and for all three mines to consequently be stomped. It is important however that the raid only stack just before the Crawler Mines spawn, otherwise Explosive Tar can appear on or around the stack point.

[Pile of Juggernaut Parts] for hunters.

Aggro
Vol'jin yells: Dey be heroes, no doubt about dat.
Baine Bloodhoof yells: Blessing of the Earthmother be upon them.

Victory
Vol'jin yells: Da beast be slain!
General Nazgrim yells: You may have defeated my war machine, but the gate still stands. You will not take Orgrimmar today.
Tyrande Whisperwind yells: Anu'dora!
A night elf Glaive Thrower appears on the roof of the western burrow, firing rapidly at the gate as Tyrande and Ash'alah leap over the western barricades, leading around two dozen mounted sentinels. In eight seconds, the gate is broken and forced open.
General Nazgrim yells: What!? Kor'kron, to the gates! Now!
A large mass of Kor'kron Grunts rush into defensive position in front of the gate.
Tyrande Whisperwind yells: At them, my sisters! For Kalimdor!
The nightsabers leap and run into battle and their riders engage the grunts. Vol'jin can only voice his amazement at this turn of events.
Vol'jin says: Tyrande...
Tyrande Whisperwind yells: Don't think we're here to save you, troll. We're here for Kalimdor. Get forces inside the gates while we distract the enemy!
While the raid moves onward, the sentinels will eventually kill all the grunts then retake formation, back where they landed in front of the barricades.