From Wowpedia
(Redirected from Iron Star)
Jump to: navigation, search 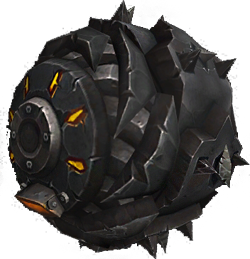 Iron stars are large weapons of mass destruction first created by Siegecrafter Blackfuse. Kor'kron Iron Stars were used by Garrosh Hellscream during his encounter in Siege of Orgrimmar. They are giant rolling bombs that, once primed, will spew flames as they roll and crush or burn anything in their path before exploding with enough force to wipe out whole squadrons. Judging by the Iron Horde's use of them, they can apparently be re-purposed to serve as engines as well.

The foundation of all Iron Horde technology is a primitive, coal-fired centrifugal engine which can be used to turn wheels, belts, and chains, allowing for the construction of crude vehicles and siege weapons including tanks, cannons, and chariots. The Kor'kron Iron Star, an early, unmounted version of this engine, was first unleashed by orcish siege engineers during the final battle of the Siege of Orgrimmar, and it is this technology that Garrosh smuggles into the past. The Kor'kron Iron Star was incorporated into the final encounter with Garrosh during the Siege of Orgrimmar specifically to foreshadow the Iron Horde.[1]

Somehow, the goblins figured out how to focus the power of a

[Core of Flame], and the technology is used in the iron star engines that the Iron Horde is using extensively throughout Draenor.[2] The

[Core of Iron] is the heart of the goblin "Iron Star" technology.[3]

During the meeting on the Throne of Kil'jaeden, Grommash Hellscream launched an iron star against Mannoroth.

One of the uses of the iron star that Iron Horde intended to unleash within Blackrock Mountain was to act as a weapon of mass destruction, capable of erupting a volcano.

During the Fourth War, an Azerite Iron Star was used by the Horde to breach the walls of Boralus.[4]

Iron star-powered cannons can apparently also be used to transport troops, as evidenced by the fact that the Ironmarch forces use them to shoot cages filled with orcs onto the Shattershore. These cages are called iron capsules.[5]

[Iron Starlette] was a reward from

[90] Report to the King/Warning the Warchief during the Iron Horde Incursion world event.