From Wowpedia
(Redirected from Iron Vrykul)
Jump to: navigation, search

Iron vrykul are the original form of the vrykul, before they were afflicted with the Curse of Flesh. They were created by the titan Keepers from the Forge of Wills, in the Halls of Lightning wing of Ulduar, alongside many other titan-forged such as the earthen.[1] 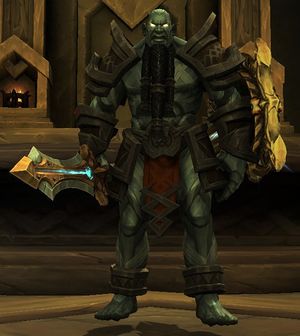 The vrykul were created by the titans[2] during the ordering of Azeroth. After the defeat of the Old Gods on Azeroth, the keepers crafted with the help of the Forge of Wills a second generation of titan-forged, amongst them the iron-skinned vrykul. Their task was to safeguard the Keeper's holding alongside the chiseled tol'vir.[3] The vrykul revered their creators and worshiped them as gods. They were aware to at least some extent of the events which took place in that period, including Tyr's battle with the mighty Galakrond, and incorporated at least some of their exploits during that period into their legends and mythology.[4]

After the creation of the Dragon Aspects, an army of vrykul was created by Odyn in order to protect Azeroth. Odyn turned the titan-forged Helya in the first of the val'kyr against her will, to give her the power to bring back the souls of dead vrykul from the shadowlands. Helya went on to create more Val'kyr from female vrykul to help her with her duty. Then Odyn and Helya created the Halls of Valor, and all vrykul received a call: those who proved their bravery by dying in a glorious battle, would live again in his hall in a storm-forged body. The valarjar was created.[3]

The vrykul considered Stormheim as their ancestral land, probably living there before moving to Northrend.[5] As time went by, vrykul began separating into several small clans, most of them recognizing a central king as their ruler. Though they were warlike creatures, most of the clans avoided direct confrontation. The Winterskorn clan was an exception, believing that in order to reach the Halls of Valor they needed to develop a culture of violence and aggression.[3]

The Hyldnir frost vrykul became at some point the loyal servants and helpers of keeper Thorim. Along with the frost giant faction known as the Sons of Hodir, they helped Thorim guard and protect Ulduar. However, this ended when Thorim's wife, a Hyldnir vrykul called Sif, was slain by Loken, Thorim's brother. A war between the Hyldnir and the Sons of Hodir started after Thorim brutally attacked the ice giants that were framed for the death of Sif. Thorim exiled himself to Temple of Storms in grief, but the war between the Hyldnir and the Sons of Hodir continued for many millennia to come.[3]

The sealing of the Halls of Valor

In order to neutralize keeper Odyn, Loken helped Helya be free of Odyn's control. Helya resented Odyn deeply for forcing her to become a Val'kyr against her will. Helya then used her powers to seal off the Halls of Valor and the inhabitants within. Only a few Valarjar were outside of the Halls of Valor when Helya attacked.[5] Though Odyn and his Valarjar could not leave the Halls, Odyn continued bringing the souls of worthy vrykul to increase the ranks of his Valarjar. Helya, meanwhile, went on to create a mist-shrouded home for herself and some Val'kyr that followed her, known as Helheim. This realm would become the final destination for many vrykul spirits after death, as Helya started using her Val'kyr to wrest away the spirits of dead vrykul from the Val'kyr that had remained loyal to Odyn. Though trapped, Odyn and his Val'kyr were still powerful, so most of the spirits Helya ended up taking to Helheim were the ones of those deemed unworthy by Odyn's judgment.[3]

Over several millennia, Helya claimed as many souls of slain vrykul as she could, and her ranks of Kvaldir--corrupted, undead vrykul--continued to swell.[5] Helya tasked the kvaldir with dragging the souls of the unworthy and dishonorable vrykul to Helheim.[6] After a while, Helya began to go after the souls of not just the heroic vrykul dead but also the living. Any vrykul who seemed poised to learn the truth about the conflict between Helya and Odyn became a target, and she had her Kvaldir slay them with ruthless efficiency. She started to raise her own champions, the Helarjar of Helheim, and she had them search Azeroth for her enemies.[5] Helya sent them to kill vrykul in order to rob their unjudged souls, and either trap them in Helheim or convert them into kvaldir, thus robbing Odyn of his champions.[7] Any spirits that ended up in Helya's care suffered greatly. Helheim was torment for vrykul heroes, who found themselves transformed into Kvaldir even if they had been worthy of entering the Halls of Valor as Valarjar. Many of these vrykul became more dangerous in death than they had been in life. Empowered by Helya and afraid of disappointing her, they zealously obeyed her commands.[5]

After the sealing of the Halls of Valor, some vrykul came to believe that their path to a glorious afterlife with Odyn would be cleared if they once again held their ancestral home of Stormheim. Stormheim, on what would later be known as the Broken Isles, was however occupied by Highborne night elves. The vrykul hero and king Magnar Icebreaker led a massive attack on Stormheim, surprising the Highborne with their ferocity. For weeks the elves and vrykul skirmished, with Magnar leading the charge. The vrykul's assault scored immediate victories and gave them enough momentum to push the Highborne out of their city. The elves' last chance to reclaim Stormheim happened at the Battle of Suramar Pass,[8] but in the end the vrykul stood victorious. The Highborne were forced to flee and never made a claim upon Stormheim again. The vrykul had to fight some traitors loyal to Helya and her Helarjar forces, which tried to wrestle Stormheim from the vrykul. Though Magnar and his sons were killed, the vrykul were able to prevent the Helarjar from claiming Stormheim.[5]

The largest clan to settle in Stormheim was the Tideskorn, while other groups included the Bonespeakers, mystics that tended to the graves of Vrykul heroes. The Stormheim vrykul, being cut off from their Northrend kin, elected a new king to lead them. Magnar and the many different kings that followed were buried either in the Tomb of the Old Kings or in the Field of the Fallen Kings. The val'kyr Eyir created a new group of female vrykul in Stormheim, the Valkyra, who aspire to become Val'kyr and serve under Odyn in the Halls of Valor. 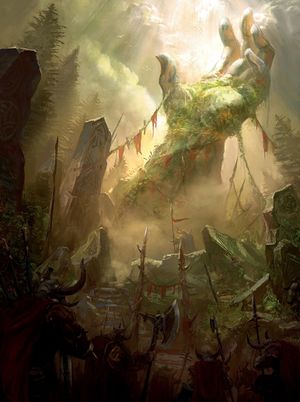 After the titan-forged were exiled from Ulduar by the betrayer Loken, the fire giants Ignis and Volkhan took control of the Winterskorn clan and fortified their metal hides with enchanted armor in a desire to conquer the Storm Peaks. However, the Curse of Flesh began to spread among the vrykul, changing their metal skin into the flesh. In order to bridge this weakness, Ignis and Volkhan constructed an army of molten giants to help the vrykul in the war. The massive army attacked the earthens, starting the Winterskorn War. It was only thanks to the help of Tyr, Archaedas and Ironaya that the earthen drove them back.[3] Tyr, alongside his companion Archaedas, forged a shield named

[Truthguard] and gave it to a vrykul champion named Yrgrim the Truthseeker to help expose Loken's treachery. This allowed them to convert many vrykul to their cause.

Ignis and Volkhan didn't abandon the war, however; they enslaved the proto-dragons to help the vrykul in the war, and renewed their attack. After losing more and more ground to the Winterskorn army, Tyr decided they needed more help. He was able to convince the Dragon Aspects to help them put an end to the war. Thanks to the combined powers of Ysera and Nozdormu, the Winterskorn vrykul were trapped in a mist and fell into a deep sleep for several millennia. They were locked away in tomb cities across what would later become Northrend. However, the curse of flesh continued to warp the sleeping vrykul and when they woke, thousands of years later, they were nothing more than beings of flesh and blood.[3]

After the war, Tyr and his companions stole the Discs of Norgannon from Loken, and rounded up titan-forged that would follow them away from Ulduar, in order to analyze the data and plan a way to stop Loken. Among these people were some vrykul that decided to follow Tyr. After the group had traveled a long way south and were in the area currently known as Tirisfal Glades, C'Thraxxi monsters sent by Loken caught up with them. Tyr fought them and sacrificed his life to stop them. His companions and the rest of the group continued their journey further south, but the vrykul were so moved with Tyr's sacrifice that they decided to stay behind and guard his tomb forever. They named the area Tirisfal, which in their language meant "Tyr's Fall".[3] Some of these vrykul formed a secretive group, Tyr's Guard, to protect the tomb forever.[9]

For thousands of years, the imprisoned Old God Yogg-Saron was unable to do more than keeping the Keepers quiet and complacent inside Ulduar. His grasp on them was tenuous, and convincing them to directly help the Old God had proven fruitless in the past. It was not until Cho'gall of the Old God-worshiping Twilight's Hammer clan infiltrated Ulduar and weakened Yogg-Saron's chains that the entity's influence on the Keepers increased, becoming strong as iron. Yogg-Saron commanded Loken to create a new army from the Forge of Wills. In Loken's hands, the forge churned out legions of iron dwarves and iron vrykul who sought only bloodshed and war.[10]

These corrupted iron dwarves, iron giants and iron vrykul formed Loken's army of iron. The creator of these new iron vrykul is the fire giant named Volkhan, who can be seen forging new additions to the iron vrykul army in the Iron Crucible inside the Halls of Lightning. Iron vrykul were also stored below the Forge of Wills. By the time of the Burning Legion's third invasion of Azeroth, they have rejoined the Keepers's forces as seen in Ulduar.