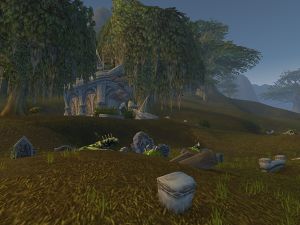 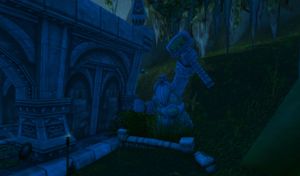 Ironbeard's Tomb is located just west of the road to Dun Modr in the north-central part of the Wetlands. The crypt has been defiled by oozes in black, crimson, and monstrous varieties, and none who wish to bury their dead come here any longer. Adventurers used to journey to the tomb in hopes of locating Sida's lost bag, which could rarely be found on any given ooze in the area.

Besides the crypt, there is also a graveyard and a dwarven statue, presumably of Ironbeard himself.

Ironbeard's Tomb is an ancient dwarven crypt that is crawling with oozes. The Dark Iron dwarves of Dun Modr uncovered ancient writings in their ruined fortress that spoke of an artifact called Ironbeard's Axe. They leaked this information to both Menethil Harbor and the Dragonmaw orcs, and later planned to incite both factions to race to Ironbeard's Tomb, fighting oozes and each other in the process. In the aftermath, Dark Iron agents ambushed the victors on their way out, thereby claiming the magical axe for themselves.[1]