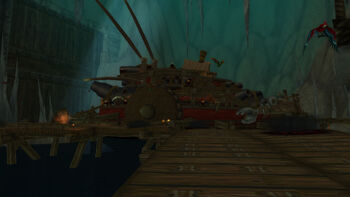 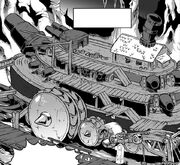 The juggernaught in Legends.

Ironclad Cove is the large walled-in cove that now acts a monumental cavern in which lies the Defias juggernaught. On one side of the cavern is the massive door made for the juggernaught to pass through once it is finished, and its other side can be seen in northern Stranglethorn Vale. In the middle is the shipyard and docks surrounding the ship. Admiral Ripsnarl, "Captain" Cookie and Vanessa VanCleef can all be found here. On the opposite side from where you enter is the instance exit.

It was previously held by a pirate crew, which was murdered by the Defias when they took over the area.[1]

At some point, the area was invaded by Jerias Bloodvein of the Bloodsail Buccaneers and his pirate crew.[2]