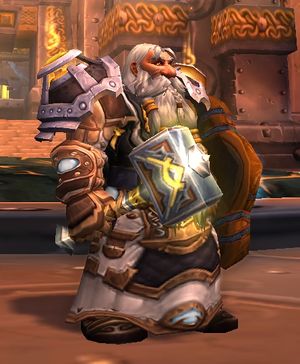 Ironfoe is a level 51 epic quality one-handed mace. It is the twin weapon of

[Ironfel]. Ironfoe is one of the Dark Iron dwarves' most sacred artifacts,[1] and is a power unto itself and could spell disaster for the Dark Irons if their enemies learn how to use it.[2]

The mace is a very rare drop from Emperor Dagran Thaurissan in Blackrock Depths.

Ironfoe, the legendary orc-slaying hammer, was forged by Franclorn Forgewright. While he kept its twin,

[Ironfel], for himself, he bestowed Ironfoe to Marshal Windsor's great, great grandfather, which was then passed down each generation to him.[3] Its twin Ironfel was given to Fineous Darkvire, who succeeded Forgewright after his death as the new Dark Iron Chief Architect.[4]

Ironfoe was taken from Marshal Windsor when he was captured by Dark Iron dwarves and held in Blackrock Depths. It was used by Emperor Dagran Thaurissan himself, until the Emperor's death.

Ironfoe was wielded by Thaelin Darkanvil and used to shape Azerite on the Black Anvil. It was taken by the Venture Company during an attack on Shadowforge City, and delivered to Mogul Razdunk on Kezan. Moira Thaurissan dispatched an Alliance hero to reclaim Ironfoe from Razdunk in the MOTHERLODE!!,[1] and it was returned to Thaelin who once again used it to smelt Azerite.[5]

The hammer is named after the legendary dwarven smith Kaltor Ironfoe, who forged battleaxes which also bear his name. Three are known to exist, two of which are in dwarven hands. The third is believed to be lost somewhere in Felwood, and may be in the Burning Legion's control. An ironfoe is crafted from a single, massive block of dark iron, sculpted into a perfectly symmetrical shape. Dwarven runes are carved in relief on its surface, suggesting (correctly) that this is a weapon of great power. An ironfoe is a dark iron battleaxe of instinct that feels perfectly comfortable in its wielder's hand, despite its obvious heft and weight.[6]

The original Chance on Hit effect was not restored. Instead it now uses the effect from

[Thrash Blade]. Procs from this weapon are incorrectly listed as Thrash Blade in the combat log.

Prior to the item squish in Warlords of Draenor, Ironfoe's proc was "Fury of Forgewright", which granted 2 extra attacks on the next swing and caused the wielder to speak Dwarven for 10 seconds. This was effective for Alliance and Horde characters alike, and it allowed a Horde wielder to communicate with nearby Alliance dwarves through /say and /yell.