This article is about the Ironforge dwarves' lore. For the dwarven playable race, see Dwarf (playable). For dwarves in general, see Dwarf.

The Ironforge dwarves[2] hold the majority of the mountainous Khaz Modan region, in the Eastern Kingdoms.[3] They have a natural resistance to frost magic.[2] They had a digsite in Uldaman that was overrun.[4] They are led by the Bronzebeard clan.

Alternative names for these dwarves are Bronzebeard dwarves,[5] sometimes hill dwarves,[6][7] and have once been referred to as mountain dwarves.[8]

They are the standard playable dwarves, with their cousins the Dark Irons being playable as an allied race.

“The bold and courageous dwarves are an ancient race descended from the earthen—beings of living stone created by the titans when the world was young. Due to a strange malady known as the curse of flesh, the dwarves' earthen progenitors underwent a transformation that turned their rocky hides into soft skin. Ultimately, these creatures of flesh and blood dubbed themselves dwarves and carved out the mighty city of Ironforge in the snowy peaks of Khaz Modan.”

Following the dwarf identity being made in the wake of the awakening of the earthen, the dwarves founded the mighty city of Ironforge as well as the kingdom of Khaz Modan. For many long centuries, dwarven kind lived united — with three factions rising among them known as the Bronzebeards, the Wildhammers, and the Dark Irons. Under the wise rule of High King Modimus Anvilmar, these three factions remained cordial. When Modimus passed away from old age, tensions boiled over among the clans, and war erupted for control of the city.[9] Thus began the War of the Three Hammers, a savage conflict that raged for many years, during which time the Bronzebeard clan won sole ownership of Ironforge and expelled its rivals. While the second stage of this war saw the Ironforge dwarves working with the Wildhammer dwarves, the latter did not return to the city due to the pride of their leader, Khardros Wildhammer. Instead, the Valley of Kings was erected as a monument to Wildhammer and Ironforge friendship, and while rivalries would continue, the two did not raise arms against one another ever again.[10]

Some Ironforge dwarves aided the humans during the First War, such as Thargas Anvilmar.[11] Khaz Modan was besieged by the rampaging Horde that was heading north during the Second War. The proud dwarves of Ironforge made their stand alongside their gnomish cousins. Inch by inch, the Horde claimed Khaz Modan; though the dwarves and gnomes made it difficult as the Horde forced their way through the territory. Eventually, the twin-race host was forced to split as both races retreated to their respective capitals, with Orgrim Doomhammer, Warchief of the orcish Horde, committed his forces to what he saw the greater threat of the two, Ironforge. Unlike with the rest of Khaz Modan, the siege of Ironforge was unsuccessful, with nearly every resident of the city taking up an axe to defend their home. By the end of the siege, ten orcs were slain for every dwarf felled, and Orgrim called off the attack to surround both Gnomeregan and Ironforge, instead of conquering them, leaving the Bleeding Hollow clan to this task. Khaz Modan was the prize, and its resources were soon being mined by the Blackrock clan to serve the Horde's needs.[12]

As the war moved north, Ironforge's dwarves offered to join the Grand Alliance. Led by King Magni Bronzebeard, the city's resilient inhabitants proved to be a valuable addition to the Alliance forces, helping to secure victory after victory against the orcs. Ever since that time, Ironforge's dwarves have remained an invaluable part of the Alliance. When Khaz Modan was liberated, the dwarves continued to aid the Alliance, even after their Wildhammer dwarf cousins began to pull away following the Third War.[13]

Apart from reveling in the prospect of battle, the dwarves have long been interested in uncovering the truth of their enchanted past. Due to the efforts of dwarven archeologists scattered throughout the world, much has been learned about the race's origins and the curse of flesh that afflicted the earthen by finding the Discs of Norgannon in Uldaman.[14] Many mysteries still remain, however, and the dwarves have continued excavating Azeroth's ancient sites for answers.

Most recently, a twist of fate has drawn the rival clans back to Ironforge after they'd spent centuries apart. When freak natural disasters began rocking much of Azeroth just prior to the Cataclysm, the dwarven lands were not spared from the calamitous upheavals. A series of violent quakes tore through areas surrounding Ironforge, reducing settlements to rubble and taking the lives of many innocent dwarves in the process. To glean answers as to the troubling state of the world, King Magni selflessly underwent a mystic ritual to commune with the earth. The archaic ceremony, however, had an unexpected effect: Magni was transformed into diamond and became fused to the depths of Ironforge itself.[15]

In the power vacuum that followed, his estranged daughter, Moira, who had married into the much despised Dark Iron clan, briefly claimed Ironforge's throne and effectively locked down the city. If not for the intervention of King Varian Wrynn of Stormwind and his son, Prince Anduin, her brash actions might have sparked another civil war. With Varian's guidance, control of Ironforge has since been divided equally among the Bronzebeard, Wildhammer, and Dark Iron clans through the Council of Three Hammers. Yet as bitterness and prejudice fester among the clans, the council's ability to govern as one remains uncertain.[2] It would take some time for the dwarves to finally stand united and fears over the Dark Irons in particular to fade, though the clans stood together under the Alliance's banner.

Magni would eventually awaken just before the advent of the return of the Burning Legion. While many feared this would disrupt the new balance of the Council, Magni did not assert control over Ironforge. Instead, he donned the moniker of Speaker of Azeroth, departing to ensure that the world would be protected from Sargeras, and acting as the voice of the planet in the wake of the monumental threat before them.[16]

By the time of the Fourth War, Muradin Bronzebeard and the Ironforge dwarves led a united coalition of the Three Hammers to aid in Stromgarde against the Horde in the Battle for Stromgarde.

Most dwarven males are stocky, muscular, and all of them have facial hair.

Female Ironforge dwarves are short and stocky like their male counterparts.

Most Ironforge female dwarves do not appear to have beards. However there really are some bearded female ironforge dwarves as proven by Graun Blump. Beards owned by female dwarves appear to be rare. However, female dwarves who sported strong beards are considered a sign of beauty among members of the race.[17] Two bearded sisters fought in the battle to retake Grim Batol.[citation needed]  It is unknown if other female dwarves grow beards, but then chose to shave. 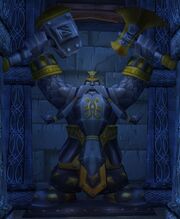 Modimus Anvilmar depicted by the great statue at the Gates of Ironforge.

They are also referred to as Bronzebeard dwarves[18][19][20] and it is the racial class of dwarves and player race in the Warcraft RPG. The term can also be used to refer to the playable race of dwarves in World of Warcraft, the dwarves of Ironforge faction.

The "Ironforge dwarf" class indicates that an Ironforge dwarf not only has a greater understanding of the dwarven heritage but also dwarven fighting styles and the innate abilities that dwarves can harness with sufficient training.[21]

Drinking, made famous by the dwarves.

The dwarves of Ironforge are a proud, stern and determined people with streaks of kindness hidden under the gruff exteriors of their sturdy frames. Their love for battle, invention, and exploration impels them ever forward to discover and unearth the mysteries of their heritage, educating them further about those who first created the dwarven race. Only recently have the dwarves discovered the legacy of their ancient progenitors, the Titans. As the dwarves begin to delve deeper into the mysteries of their past, they also begin to uncover deeper enigmas. Still, they keep to the forges and workshops, ever innovating and creating new and more effective ways to destroy. Steam-powered technology and firearms originate from dwarven inventiveness and creativity. The stout race is renowned for its skills at battle and also as cunning engineers and crafters. The uncovered fragments of their distant past have led the dwarves on an unprecedented exodus of exploration. Seeking out their origins, the dwarves have dispatched prospectors across all of Lordaeron in order to seek out signs of the Titans, the supposed creators of the dwarves. The dwarves have embraced the idea that it is their purpose to search the world for more signs of proof of their heritage. Dwarven outposts exist in the most desolate of places. Here, the dwarves spend their time seeking out the secrets of ancient times, or simply use their outposts as staging grounds for expeditions to clear out their enemies so that they may continue their quest.[23]

Ironforge dwarves are affiliated with the Alliance. While the dwarves of Ironforge appreciate the fighting skill of the Horde, it is with grim eyes that they look upon the orcs and their allies, the trolls and the Forsaken. Although the dwarves have held dealings of commerce and diplomacy with the high elves, they keep the people of Quel'Thalas at an arm's distance. While the night elves may share the same allegiances, the dwarves look upon them with suspicion and some trepidation. Humans, however, are the staunch and constant allies of the dwarven people and find welcome, favor and kindness when in dwarven lands.[23]

The Ironforge dwarves also view their gnomish cousins with much love due to shared interests in invention, exploration, and the gathering of knowledge as evidenced by their invitation to the Gnomereganian refugees to live in Ironforge. They have been known to be on extremely friendly terms with the few pandaren who have made it to Ironforge and other dwarven settlements.[24][25]

The Ironforge dwarves dwell in and around Ironforge Mountain. The city of Ironforge is a vast subterranean city carved into the depths of Ironforge Mountain. This vast complex has served as the dwarven homeland for thousands of years. The city of Ironforge is not only home to the dwarves, but also their gnomish cousins driven from their capital of Gnomeregan. Ironforge sits north of the Dun Morogh Peaks, located high above Loch Modan in central Khaz Modan. King Magni Bronzebeard presides over the social and cultural matters of the dwarves and rules with a temperament befitting a dwarven warrior, artisan and explorer.[23]

Dwarven priests deliver the message of the Light to their people. They share this faith with humanity and uphold its precepts and teachings. Some dwarves have recently taken to investigating the past and discovered that the Titans themselves were godlike beings. No one has yet begun worshipping the titans as gods, for it would seem that the Light prevails over the reverence for the dwarves' own progenitors.[23]

Dwarves speak Dwarven and Common. Dwarves learn languages that tend to be of most use to them in either practical matters, or in matters of trade and diplomacy, including Gnome, Goblin, Orcish, and Thalassian.[21]