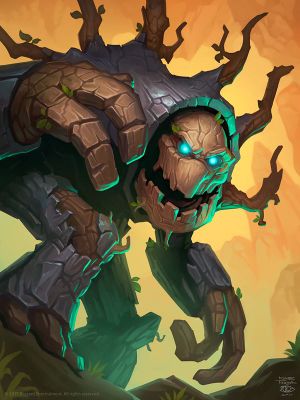 An Ironwood Golem in Hearthstone.

Ironwood is a product of ironwood trees which can be found in Northeron,[1] Feralas[2] and possibly Felwood.

It is a strong and sturdy type of wood that was studied by the high elven craftsmen at their lumber mills and then used in the construction of ballistae[3] and Alliance shipyard platforms.[4] Night elven ballistae were also known to fling heavy bolts of ironwood at both enemy forces and structures.[5]

Forest troll lumber mills were generally carved out of the husks of ancient fallen ironwood trees.[6] This might imply that ironwood trees grow around Zul'Aman and neighboring areas around the northern Eastern Kingdoms.

An altar made of ironwood and Blackroot was used by Gul'dan during one of his dark incantations to kill many of his necrolyte followers and instill their evil spirits into the corpses of fallen Knights of Stormwind to form the first of the unholy Death knights which later fought in the Second War.[7]

It is used for creating weapons, such as war clubs.[8]

Items made from Ironwood

Other uses of Ironwood