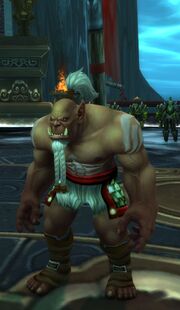 At the Emperor's Reach. 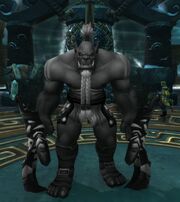 Ishi is a Mag'har orc blademaster, and one of Warchief Garrosh Hellscream's most valued champions.

Ishi is first encountered in the Shrine of Two Moons watching over Garrosh, along with Malkorok.[1] He is later seen in Garrosh'ar Advance.[2]

Ishi is tasked with locating the

[Divine Bell], though is beaten to it by the kaldorei. After Garrosh manages to seize it, Ishi is present to witness Garrosh herald a new age of power for the Horde, using the bell as an instrument to drastically increase battle prowess via sha energy. Ishi is overtaken by the power of the sha, though is unable to control it despite Garrosh's best efforts at encouragement. Ishi is subsequently killed (either by Horde or Alliance players), his last breath an apology to the Warchief for failing him.