The Isle of Giants is an island located off the northern coast of Kun-Lai Summit and inhabited by primal devilsaurs, direhorns, and skyscreamers raised by the Zandalari trolls.

There is no "official" way to get to the isle: there are no introduction quests or NPCs to tell you about it.

Fly north from central Kun-Lai Summit on a flying mount through the fatigue waters to reach the Isle of Giants. On the Isle's southern side are two flight masters, one for the Alliance and one for the Horde. The isle is a no-fly zone and the Misty Shores in the waters before reaching the isle will dismount all comers.

If you do not have a class ability to navigate water faster, or a swimming mount, you may want to invest in an

[Reins of the Azure Water Strider] from Anglers reputation.

The Isle is a volcanic, mountainous place, dominated by the large caldera dotted by steam pools in the center of the island. The southern beach is the only easy means of accessing the island's interior from the ocean, and thus the Horde, Alliance, and Zandalari all have landing sites there. 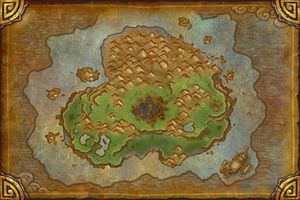 Map of the Isle of Giants. 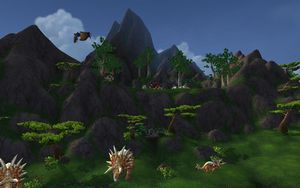 The Isle of Giants seen from the south.

Beeble's Wreck and Bozzle's Wreck are both found on the southern beach with factional flight path connections to:

Regions adjacent to the Isle of Giants 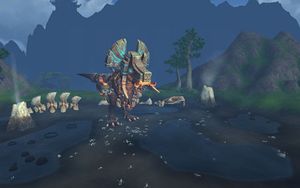 There are no major quests on the Isle of Giants outside of Kuma's bone collection quests:

There are no herbs or mineral veins on the Isle of Giants.

All wild pets are item drops or quest rewards: