The Isle of Quel'Danas (also known as Sunwell Isle[1][2] or simply Quel'Danas)[3] is a zone north of the Eastern Kingdoms added in patch 2.4, and is one of three areas that make up Quel'Thalas. It is the first outdoor zone added to the game via a patch, and includes many daily quests as well as the last raid and dungeon content released prior to World of Warcraft: Wrath of the Lich King.

The island's highlights include the Sunwell Plateau, the site of the sacred Sunwell from which Kil'jaeden is being summoned; Magisters' Terrace, the place Kael'thas Sunstrider made his final stand; and Sun's Reach, a town reclaimed by a combination of Aldor and Scryers forces known as the Shattered Sun Offensive. 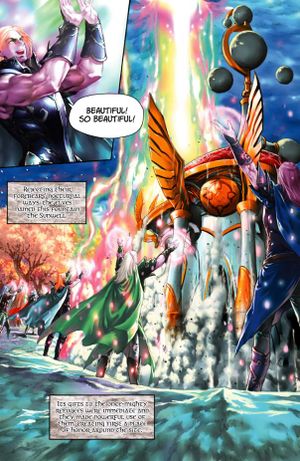 Seven thousand years ago, when Quel'Thalas was founded, Dath'Remar Sunstrider, ruler of the new elven kingdom, created a mystic fountain at a convergence of ley lines on this island off the northern coast of Eversong Woods, utilizing a vial of water stolen from the Well of Eternity sometime before the Great Sundering. As a result, the island - which became known as Quel'Danas - is also known as the Sunwell Isle. The Sunwell's power allowed the elves to build their cities and shape their land, as well as defend their city; during the Second War, the elven Magisters used its power to erect a shield around Silvermoon City to hold off the Old Horde's invasion.[4]

Separated from the mainland by a channel of the North Sea, this island nonetheless came under attack during the Third War, when the corrupted Prince Arthas Menethil led the Scourge in its slaughtering rampage through Quel'Thalas. Using the power of Frostmourne, Arthas had created a bridge of ice linking Quel'Danas to the mainland, allowing him and his forces to reach the Sunwell Isle and carry out their dark mission to resurrect Kel'Thuzad.[5] The Dead Scar, the path of Blight that splits Quel'Thalas in two — marking the route that Arthas' legions took to the Sunwell — abruptly ends about halfway across the island, near the entrance to the Sunwell Plateau. The Sunwell was befouled with the resurrection of Kel'Thuzad, and the island left to rot as the Scourge continued its relentless march through northern Lordaeron.

During his invasion of Quel'Danas, Arthas slew the high elf king Anasterian Sunstrider; battled the Grand Magister, Belo'vir Salonar; and between his minions and the treacherous Dar'Khan Drathir, the entire Convocation of Silvermoon was slaughtered. In the aftermath of the battle, Kael'thas Sunstrider and a raid of volunteers attacked the isle, fighting off both the Scourge and the Amani in order to destroy the tainted Sunwell.[6]

After the merciless campaign of Arthas, the essence of the Sunwell endured, kept hidden by those who sought to protect it.

Kael'thas Sunstrider, former leader of the blood elves, eventually revealed himself as the Legion's formidable new ally. Despite furious opposition from his own people, Kael'thas persisted in his efforts, believing that he would obtain infinite power.[7]

Nearly six years after its destruction, the Sunwell has been reactivated by the power-mad Kael'thas and his demonic allies and is being used as a mystic portal to summon his master, the eredar overlord Kil'jaeden. At the end of the Dead Scar, near the still-shattered structures at its edge, eredar warlocks and wrathguard stand vigilant, and even some remnants of the Scourge's forces remain. The blood elven forces still loyal to Kael'thas make their final stand on the isle in defense of their prince, as the time of reckoning for all of the sin'dorei draws near. The prince has also brought his naga allies with him, along with ethereal mercenaries and other creatures willing to fight for him.

When Kael's forces seized the isle, the Spellbreakers, whose headquarters was located on Quel'Danas, were overwhelmed. However, some survived the attack.[8]

In response to the threat presented by Prince Kael'thas' operations on the Sunwell Isle, the Sha'tar — masters of Shattrath City — rallied the draenei priests of the Aldor and the blood elf magisters of the Scryers into a unified army, and dispatched them to Azeroth to end Kael'thas' nefarious scheme. This army, known as the Shattered Sun Offensive, has claimed the outpost of Sun's Reach and begins to retake the island from Kael'thas' legions. The Shattered Sun gradually reclaimed much of the isle and branched out to tackle more of its threats, and with the help of adventurers, succeeded in defeating Kael'thas within Magisters' Terrace and storming the Sunwell Plateau.

Ultimately, Kael'thas was slain and Kil'jaeden was defeated and banished back through his would-be portal. This was a huge victory for the blood elf and draenei soldiers, and all who opposed the Legion's Burning Crusade. The Sunwell was restored in the battle's aftermath by Prophet Velen, now not only a fount of arcane power but holy Light as well. After some of its darkest days, and with some unlikely aid, the Sunwell's rebirth and the victories on Quel'Danas have inspired all of Quel'Thalas to forge a brighter future.[9]

During the Quel'Delar quest chain, we are given a brief insight into the current status of the isle. Silvermoon Builders can be seen repairing various locations on the island, and Halduron Brightwing is seen inspecting the Blood Elven guards protecting the renewed Sunwell. Quel'Danas seems to have been completely reclaimed, and all hostile mobs including the demons, Naga, Scourge and Dawnblade Blood Elves have been phased out. Blood elf and draenei remnants of the Shattered Sun can still be found on the isle, watching over the builders.

With Quel'Delar in tow, heroes are tasked with gaining entry to the Sunwell and submerging the ancient blade within its holy power.

Access to the Sunwell itself is policed by the Ranger-General of Silvermoon, Halduron Brightwing, and only those with his personal permission are allowed entry.[10]

During the Burning Legion's third invasion of Azeroth, the Isle was attacked by felhounds led by Maag the Ravenous. The demons were killed by the priest champions of the Conclave who traveled here in order to get the pure Light from the Sunwell.[11]

The blood elves have teamed up with the ethereal transmogrifiers to put on a grand Azerothian fashion tournament. Players compete against four others to determine who is the best dresser.[12] The event is held in the Magisters' Terrace assembly chamber.

Visit to the Sunwell

The Sunwell was visited by Lor'themar Theron, Grand Magister Rommath, First Arcanist Thalyssra, Arcanist Valtrois, Silgryn, and Alleria Windrunner. The visit was intended as a gesture of goodwill for the nightborne leaders and courtesy for Alleria; while the latter was estranged from Silvermoon's political climate, Lor'themar would not deny a daughter of Quel'Thalas' request to see their people's most sacred site. Alleria's presence attracts a group of void creatures, who spill into the plateau at Nether-Prince Durzaan's command and begin spreading their corruption. The heroes, along with the Sunwell's magi, wardens, and spellbreakers, sortied to battle the void beasts and prevent the Sunwell's corruption. A powerful void horror, Aruun the Darkener, then emerged in an attempt to contaminate the well directly but was stopped and killed. Finally, a rift portal was opened directly above the Sunwell's waters, but Rommath, Thalyssra, and Alleria combined their magics to close it before catastrophe struck. In the aftermath of the battle, Alleria was exiled by Lor'themar, on the grounds that her very presence poses a threat to Quel'Thalas and the Sunwell. The battle's outcome also endeared the regent to Thalyssra, who pledged her kingdom to the Horde.[13]

As part of a ceremony of remembrance held each year in the kingdom, a blood elf adventurer, beginning in the Ghostlands, traveled through Eversong to Quel'Danas bearing a lantern imbued with the light of the Sunwell, used to reenact the sacrifices made during the Scourge invasion of Quel'Thalas. On the isle, Lady Liadrin gives commentary on what it means to be sin'dorei,[14] and the adventurer witnesses the final battle of Anasterian Sunstrider, the last king of Quel'Thalas.[15] The ceremony continues with the Sunwell Plateau, before concluding in Silvermoon. 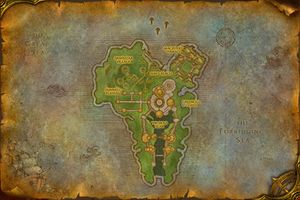 Map of the Isle of Quel'Danas.

Sun's Reach, the primary staging area for the Shattered Sun Offensive, is the primary travel hub to and from the island. This flight node is available to all level 70 players.

Players cannot reach the Isle by riding or walking, due to an invisible barrier that lies some distance north of Silvermoon City. The most common means of access are via flight path, portal, or various summoning spells.

The flight path to the zone from Ironforge, Hatchet Hills, Light's Hope, and Silvermoon City is learned automatically at level 65. After a certain phase of reclaiming the island (as indicated by the number of completed daily quests), a portal will be opened between Quel'Danas and Shattrath City, allowing easy transport to the island. The portal from Shattrath to Quel'Danas is located in the alcove behind where Exarch Nasuun stands and drops off the player in the Sun's Reach Sanctum. Complete the daily quest

[70 Daily] Know Your Ley Lines to collect an item that allows a one-time-use teleport back to Shattrath.

The Isle of Quel'Danas is known primarily for its vendors. Smith Hauthaa is both the repair vendor and the [Badge of Justice] vendor on the Isle located behind the Sun's Reach Armory, while Shaani is the Jewelcrafting recipes and epic gems vendor located on the first floor of the Inn of Sun's Reach Harbor. Hauthaa begins selling her wares late in the Shattered Sun Offensive storyline, while Shaani doesn't start until the very end.

Additionally, the Exotic Gear Purveyors of the Sun's Reach Armory are notable for selling Season 1, Season 2 and Vindicator's gear in exchange for Tier 4, Tier 5 and Tier 6 loot tokens, as well as Veteran's gear in exchange for Badges of Justice. Karynna, Olus, Soryn and Kayri are all located on the second floor of the Armory, starting in phase 3.

There are three groups of monsters at the island — demons with undead, naga, and finally Kael's blood elves. The naga go by the name of the Darkspine tribe, while the blood elves go under the name of Dawnblade.

At Greengill Coast, the Darkspine naga have enslaved the Greengill murlocs, mind-controlling them to do their bidding.

There are a wide variety of demons located around the island, primarily guarding Dawnstar Village, with reinforcements being brought in via a portal to the Throne of Kil'jaeden. There are also a number of demons at the Dead Scar, holding the undead at bay. The demons and Kael's blood elves are attacking as a unified force.

There are packs of undead which roam the southern coasts and the Dead Scar, where they battle the demons.

Malfunctioning arcane guardians patrol the western coasts of the island.

Kael'thas forces are scattered throughout the island, primarily centered around Sun's Reach, where they occupy the Sun's Reach Harbor, as well as several ships which are located a short distance from the shore. The invading forces also contain the wretched, emaciated elves which have fallen to their magical addictions.

During part of The Return of Quel'Delar quest chain (

[80] The Purification of Quel'Delar), the entire isle undergoes heavy phasing to convey the recent developments there from the finale of The Burning Crusade.

Very few areas experience such heavy phasing, even if just for a short time.

Quel'Danas is also the island refuge of the blood elf dragonhawks. It is home to the aeries where the dragonhawks and giant eagles originated and are bred for the elite windriders. Aquel'Luer'Thala is the blood elf in charge of the units stationed on the island.[17]