The Isle of Thunder storyline plays out in stages, tracked via the quest achievement

[Isle of Thunder]. Much like during the Shattered Sun Offensive to retake the Isle of Quel'Danas back in Patch 2.4, completing daily quests will unlock realm-wide progress on the Isle of Thunder, gaining access to different parts of the isle.

To limit scrolling, almost all quests are in collapsible tables. Click on a table header to show all quests in that area.

The initial stage of progression is merely getting to the Isle of Thunder itself. There are several one-time quests that start comprise this stage:

Immediately after making it to the isle, the first real stage of the storyline is building a more permanent base rather than living on The Crimson Treader and The Seabolt. Daily quests taking place in Court of Bones, Ihgaluk Crag, and Zeb'tula are then used to advance the realm-wide stage.

Adventurers will be offered eleven quests from three hubs, followed by a boss-killing quest:

Once enough realm-wide progress has been made, leaders will offer the quests

[90] The Assault on Zeb'tula, which play out in single-player scenarios. Upon completing the scenarios and quests, the next stage will begin.

Break Down the Wall

After assaulting Shaol'mara and Zeb'tula, phasing in the Violet Rise and the Dawnseeker Promontory respectively, the leaders' focus turns to opening the Emperor's Gate and tearing down the wall blocking access to the Beast Pens and Conqueror's Terrace, the first level of Lei Shen's citadel.

The Assignment Map is made available in this stage and all subsequent stages, providing adventurers the option of completing PvE- or PvP-based quests for the day. If the PvE option is chosen, daily quests in the previous three areas in addition to the Diremoor are then used to advance the realm-wide stage.

Eleven quests from the three Stage 1 areas and the Diremoor are offered, followed by a Stage 1 boss quest. For the sake of brevity, only the newly-available quests are listed here:

Once enough progress has been made, players can choose to start the next stage by completing

[90] Tear Down This Wall!, which plays out in a single player scenario.

After tearing down the wall, new quests open up in the Beast Pens and Conqueror's Terrace, which are then used to progress toward the Lightning Vein Mine and the Thunder Forges. The weekly quest

[90W] The Crumbled Chamberlain is now available as well.

Adventurers are first offered eight quests from Stage 1-2 areas, and are then offered three quests from one Stage 3 area, followed by a Stage 3 boss quest. As before, only the newly-available quests are listed here:

The end of this stage plays out in

[90] To the Skies!, the third single-player scenario.

The next step is progressing toward the Stormsea Landing, north of the Conqueror's Terrace and east of the Thunder Forges:

After completing six quests from Stages 1/2 (plus one Stage 1 boss), then three quests from one Stage 3 hub, adventurers will be sent to the Lighting Vein Mines:

[90] Decisive Action will end this stage.

The Fall of Shan Bu

The final stage is gaining access to the Foot of Lei Shen in the center of the citadel, which is the doorstep to the Throne of Thunder, Lei Shen's seat of power.

After completing the Stage 4 daily quests, Taoshi offers one last quest for the day:

The end of this stage plays out in 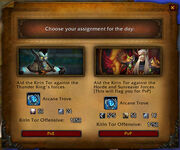 From the beginning of the "Break Down the Wall" stage of questing, adventurers are provided the option via the Assignment Map whether the wish to complete PvE- or PvP-based quests for that day's round of daily quests. The PvP quests still advance the realm-wide progress, but have a different set of rewards for adventurers.

Seven quests are offered, then

The following tables provide a list of all daily quests on the Isle of Thunder in an easy-to-manage fashion:

There are a handful of quests that can be completed once-weekly: