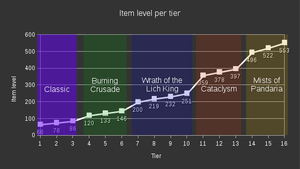 A chart showing item levels over time at the tier breakpoints, overlayed on the expansions

Item level (often abbreviated as ilevel or simply ilvl) is a rather important property of every item. It has two main functions — to reflect the item's usefulness and at the same time determine the minimum level a character must have in order to use it.

Item level serves as a rough indicator of the power and usefulness of an item, designed to reflect the overall benefit of using the item. Two items of equal ilvl should in theory therefore be of equal potential use. However, each item spends its ilvl 'budget' differently, in various primary and secondary stats, as well as in procs and effects. Since each of these values provide different benefits to different classes and specs, the true value of an item varies depending on the user, and cannot be determined solely by ilvl. Additionally, PvP Power is not counted towards an item's ilvl budget, allowing PvP gear of a given ilvl to provide an advantage in PvP compared to non-PvP gear of the same ilvl.

Item level is widely used as a means of assessing a character's power. Ilvl is used as a gating requirement when queueing for dungeons, raids and scenarios, and is often used in a similar way by players organising raids.

Noteworthy elements of TBC itemization include:

For Cataclysm items there no longer appears to be any relation between item budget and rarity; that is, an uncommon ilvl300 and a rare ilvl300 will have the same budget of points and potentially identical stats. The difference lies in the character level requirement, with rares being equippable one or more levels earlier than uncommon items of the same ilvl. World drop blues appear to be about one character level better than greens of the same ilvl, crafted items two levels, and zone drops up four levels earlier.

Uncommon/green quality caps out at ilvl 318 for Twilight Highlands quest rewards and world drops requiring character level 85. The highest rare/blue items are ilvl 346 with the exception of the upgraded crafting recipes for the later seasons' entry-level PVP gear.

In practice, almost all items from Cataclysm onward are similarly budgeted: all items of the same slot and equal ilvl will have equal amounts of primary stat and Stamina, as well as two roughly equal secondary stats, minus the points for sockets.

Cataclysm introduced reforging, allowing players to convert 40% of an item's secondary stat into another stat of their choice. Only one stat can be converted, and the points cannot be added to a stat that is already on the item. Reforging makes it easier to juggle hit and expertise caps, as well as "wasting" less points in an undesirable stat.

Also note that the Cataclysm-era PVP gear was reitemized prior to Mists of Pandaria with lower item levels but greater overall PVE stats. See below for details. Seasons 9-11 armor were affected by these changes, but not crafted gear. The Cataclysmic (S11) T1 weapons suffered an ilvl nerf without receiving the budget split or PVP power to offset it, but no other weapons were changed. The gear is listed here under the current ilvl along with its historic values.

As in Cataclysm, item budget is solely derived from item level. Rarity is purely cosmetic, designating the item's origins. The major addition is blue world drops from Pandaria with reduced (Cata-level) requirements, making them extremely useful to levelling alts.

Ghostcrawler had previously discussed the possibility of an "item squish", where item stats would be rescaled every expansion, adjusting damage, healing and health along with them. However, beta-test items listed on Wowhead indicated that this would not happen in Mists of Pandaria.

Patch 5.1 added an upgrade system in which items of ilvl 458 and higher could be upgraded +8 ilvls for 1500 of the relevant currency (Justice for PVE rares, Valor for PVE epics, Honor for PVP rares, Conquest for PVP epics). The epics are done in two steps of +4 ilvls for 750 VP/CP, while the rares are done in a single step. The upgrade simply adds more of the item's existing stats; as certain pieces (helms, chests, legs, and particularly weapons) have larger budgets than others (bracers, amulets, rings) at any given ilvl, the same number of points spent can add far more stats on different pieces. However, the total gained is typically much less than replacing a lower-level piece with a higher. The upgrade system was removed for 5.2, so players would not have to choose between upgrading old gear and purchasing new. The system was brought back for 5.3, with a reduced cost (2x250 VP) for PVE epics. Season 12 upgrades remained at their original cost, and no Season 13 or later PVP gear can be upgraded at all. In lieu of direct nerfs to Siege of Orgrimmar, 5.4.8 extended the item upgrade system, allowing SoO gear to be upgraded an additional two times for an additional 8 ilvls per piece (+16 total).

PVP gear underwent a number of changes. Resilience and a new stat, PVP power, became free additional stats to compensate for PVP gear now being lower ilvl than its PVE equivalent. The budgeting on PVP gear was changed from a split between primary/stamina/secondary/resilience to primary/stamina/secondary/secondary, making it exactly the same value as PVE gear of its level for PVE purposes. In Patch 5.3, baseline resilience was increased to 65%, while resilience was removed from all current gear and the power of PVP gems/enchants was reduced. Finally, the maximum ilvl in instanced PVP was set to be equal to that of current PVP gear. The net effect of all of these changes made PVE gear somewhat more useful for entry-level PVP, with current PVE gear being comparable to current honor gear. Baseline resilience was further increased to 72% with Patch 5.4 and to 77% with 5.4.7 and the stopgap Season 15.

The changes to items in WoD so far include:

The changes to items in Legion include:

The changes in BfA are so far: