Iverron's Antidote (Part 2) is an Alliance only quest in Shadowglen, the night elf starting area. In this quest, players are asked by Dirania Silvershine to bring an antidote to her good friend Iverron, who was bitten by a poisonous spider.

[Iverron's Antidote] to Iverron before the time limit is up. Iverron can be found by the cave to the north.

The antidote is ready, <name>. Please see that Iverron drinks it.

There is something that you should know -- the antidote -- it will only remain viable for 5 minutes. You must get it to him in time.

Oh, I knew Dirania would be able to help me!

I'm always getting into trouble and Dirania, well, she always manages to help me out of it.

I am feeling much better, but I think I will sit here for a while longer, until I feel completely better. Well, that, and I was hoping you'd clear a path for me through those vicious Webwood spiders... 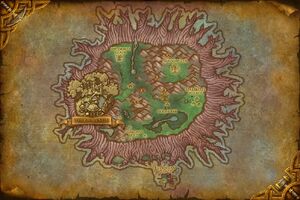 is the night elf standing by a cauldron near the entrance to the building below Aldrassil. After talking to her to complete

[4] Iverron's Antidote, speak with her again to receive this quest.

Note: this quest is timed, you must complete the quest within the 5 minute time limit or fail the quest.

can be found west of Shadowthread Cave in the northwestern corner of Shadowglen.