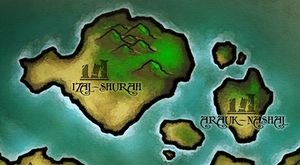 Izal-Shurah on the Broken Isles map of Warcraft III.

The Library of Izal-Shurah (simply known as Izal-Shurah) was once a great Highborne library in the city of Suramar, but now lies in ruins on the Broken Isles. According to Maiev Shadowsong, there is no knowledge left there, only nightmares and the shadows of regret. The library had been taken over (or just moved into) by a group of makrura led by a Makrura Tidal Lord, who was found seemingly lording over a pile of seashells. Maiev could blink around to collect hidden tomes of the Ancients for her to use.[1]

Izal-Shurah was a great library in the ancient times. It is possible the Kaldorei who created it even had the foresight to waterproof their books and scrolls. Nowadays, makrura overrun the place. Brann Bronzebeard suggested they should get the library's knowledge before the Broken Isles became the Broken Seaﬂoor.[2]

The Maelstrom's proximity ﬁnally proved too much for the Isles, and they began to sink back into the sea. Before they did, however, several factions — including Theramore's mages and Ironforge's Explorers' Guild — wanted to save the library of Izal-Shurah. They sent expeditions to treat with, or destroy, the library's makrura defenders.[3]

The Forgotten Library where Ivanyr is fought may be Izal-Shurah. The other libraries on the Broken Isles are in Nar'thalas Academy, which is not part of Suramar, and the Emerald Archives, which are in the upper parts of the Tomb of Sargeras.