Jace Darkweaver is a night elven demon hunter of the Illidari, initially found as a quest giver on Mardum. He used to be a mage and still retains some knowledge of the arcane, but the fel makes it near impossible to use. One thing he can still manage is the occasional spell to glimpse faraway places.[1]

Jace appears to be quite analytical and intelligent, serving as the technological brains behind the Illidari. He has shown the ability to create demonic wards[2] and handles the maintenance and upgrades to the Illidari's Legion ship, the Fel Hammer.[3] He be recruited as a class order champion.

On their mission on the prison homeworld of Mardum, he wants to gather as much intel as possible from the demon leaders in the area. Jace couldn't believe how powerful the demons were as jailers were trying to suck the souls of the other demon hunters. After Inquisitor Baleful is slain, he sense great power within the the fellow demon hunter. Making sacrifices to gather more allies is anything that they will do to accomplish their goals he says. Upon spying on a new demon called Aranasi (as if the Legion needed spiders he commented), Brood Queen Tyranna told the doom commander that demon hunters have invaded the planet. Sargeras' Keystone needed to be kept from them. Jace told the demon hunter to deactivate the Spires of Woe to kill Beliash. He also had a feeling of a ultimate sacrifice to bring in one more army to the battle. A cave of a powerful presence awaits them on the other side and Jace told the demon hunter to use their

[Spectral Sight]. With Fel Lord Caza befelled, it was time to take the fight to the Brood Queen. As progressing through her stronghold, the hold's stabilizers were taken out and Jace told them to find any others to weaken the defenses.

Within the Vault of the Wardens, many demon hunters including Jace were in stasis around the time the Legion launched their third invasion on Azeroth. Maiev Shadowsong told the demon hunter to free them to help her stop Gul'dan from another universe. Jace would secure the elevators and have a fel bat ready for the demon hunter to meet up with Kayn and Altruis.

After the Battle of the Broken Shore, Jace led the Illidari delegation to the Alliance, helping to expose the demon infiltrators and fending off an attack.

Jace briefly appeared in Dalaran, accompanying Altruis the Sufferer/Kayn Sunfury. To obtain the Aldrachi Warblades, the commander was to meet with Archmage Khadgar to obtain a

[Crystallized Soul]. Khadgar comments that the demon hunter is tapping into magic even Illidan would have considered dangerous. Upon returning, Jace uses the crystal to communicate with Allari and needed intel of where the Warbaldes were located. Barely heard from the transmission the keys words were Caria and Broken Shore, it would have to do Jace told the demon hunter. Upon return from obtaining the artifacts of power, Jace was pleased of the hunt was a success. He then told the demon hunter to give the order to kill the demons souls to empower a portal to the beyond.

On Darkstone Isle, the priest and Boros mend the wounds of Alora until interrupted by an inquisitor named Subjugator Valith. Luckily, Jace was dealing with him and assisted the party to vanquish their foe. The priest sought out a demon with a staff of crystal and Jace comments that the eredar Lady Calindris is his prey and didn't want an opportunity to slip pass him. He could use someone's back however, so joining up with the priest and Vindicator Boros would allow him to complete his mission quicker and says that he needed her soul. The portal to Niskara was up the hill and went through to obtain the artifact from Calindris. Boros and Jace were separated when the priest approached the paladin to mend his wounds. They rescue the demon hunter and escaped the legion building. A troll mage by the name of Bo'ja is freed from the cage and told the party that she had a score to settle with the eredar. She joins and with the priest delivering the final blow to Calindris, her, Jace, and Boros were gasping for breath. The demon hunter felt the power coursing through his veins as Boros told him that it's not too late to turn to the Light and be cleansed of his corruption. Jace told the paladin to spare him his platitudes and wanted to stop the Legion at all cost for nothing is more important than their destruction.

Jace is stationed at Illidari Stand in Azsuna.

On the Fel Hammer Jace requests the last few parts from the other command centers. Otherwise, the Fel Hammer is ready to jump to Niskara he commented. Upon returning, a loud rumble came from the south of the ship. The Deceiver appeared before the demon hunter to tell them that joining the Felsworn be the end of the conflict. Declining the offer makes the Felsoul siblings to take care of them on Niskara. After dealing a terrible blow to the Legion including Kil'jaeden, Jace was ready represent his faction: the Illidari. 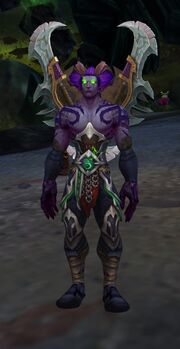 Now, let's be about our business.

Jace, what is this Nether Crucible?

The crucible? It's a device that we can use to scry upon others or communicate across great distances.

We can even use it to contact other dimensions.

It feeds on fel energy. The more distant the target, the more energy required by the ritual.

What's your opinion about the Shivarra?

The Shivarra and many other demons swore fealty to Lord Illidan when he defeated their former master, the pit lord Magtheridon. We also have naga, broken, and some other creatures working for us.

If the Lord of Outland is okay with it, then I guess that's good enough for me.

Somehow, the Burning Legion is nullifying my demon wards. If we don't get those defenses back in working order, we'll be overrun and I will have failed all of us.

We are in your debt, <class>, for aiding in the fight against the Legion.

Milord <name>. We are most grateful that you have come to lead us to victory against the Burning Legion.

That Jace used to be a mage but was already a demon hunter by the attack on Mardum during The Burning Crusade, several years before common night elves re-accepted the arcane, may mean that he is a Highborne.