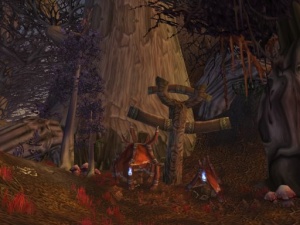 Jadefire Run is a satyr encampment in northern Felwood. The most powerful satyr in the region make their home here, so exercise caution when adventuring in the area. The demons of Jadefire Run seemingly abandoned the area after the Cataclysm, and it was claimed by Whisperwind Healers. Feronas Sindweller, a demon hunter, was under the impression the healers were nothing more than the demons in disguise. There also appears to be more traditional demonic architecture in the Run.

Jadefire Run is a large satyr camp located near Felpaw Village in Felwood. This camp is likely the staging point for assaults on the nearby Timbermaw furbolgs. The satyrs here are also likely the source of the continuing corruption of the Felpaws, and they might also have their eyes on corrupting or killing the Timbermaws as well.[2]