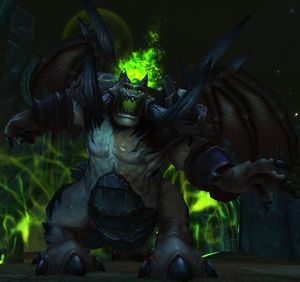 He was accidentally summoned by the Council of the Black Harvest, and captured five of them, killing one for his insolence. He took the five to his lair, where they escaped their prison. All but two were captured- the newest member and Ritssyn, who apparently dies from his wounds. After examining the tomes his minion Calydus showed the four council members, he finds them. Jagganoth picks up Shinfel Blightsworn and throws her then casts fel meteors to attempt to kill the other three. Zinnin Smythe and Jubeka Shadowbreaker collapsed anshe told the new blood to run to the portal quickly. Jagganoth summons an infernal that stood before the new blood and Calydus and the portal. After the infernal is defeated, Jagganoth exclaims that he will see the end of them.

The sole free member hunts down one of three artifacts, and returns to the Dreadscar Rift. The pit lord tells them that the remaining council members (excluding Ritssyn) has been taken to honor his master Mephistroth. The new blood wielding the artifact kills Jagganoth, taking command of his demonic armies, who are thankful for being free of the cruel tyrant. With Jagganoth dying within the Twisting Nether, it is impossible for him to return as his immortal demonic soul has been vanquished.

His corpse and heart were strung up not far from where he perished, as an example to the enemy and as a tool. His heart and blood are used to further empower the artifact that killed him and others.