Jan'alai is the dragonhawk loa of the Amani trolls.

In Zul'Aman, Hex Lord Malacrass stole her essence, imbuing it into one of the Amani's deadliest rogues.[1] Jan'alai's spirit is chained by Zul'jin. She is freed when the chieftain troll is killed.

Jan'alai appears with the other Amani gods in Zul'Drak, directing the player to the leopard goddess, Har'koa.[2] The Amani gods are also summoned and tell the player to defeat the guardians at the Altar of Quetz'lun and kill the Prophet of Akali.[3]

Jan'alai appears in Zul'Aman where her spirit is chained by Daakara. She is freed when Daakara is killed.

A Disciple of Jan'alai is present in Tal'aman, the Amani tribe's enclave in Zuldazar. 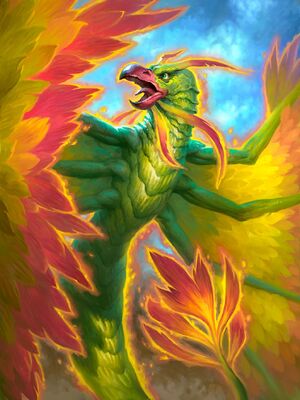 Jan'alai, the Dragonhawk in Hearthstone.

In the Hearthstone expansion Rastakhan's Rumble, Jan'alai serves as the patron of Jan'alai's Dragonhawks, a fire-obsessed team of troll mages, and personally appears as a legendary mage card. Her flavor text reads: "You mess with the Bird, you get the Firelord."