Jan'alai is the Amani lord of dragonhawks. He is one of the four animal bosses in the Zul'Aman instance. He is guarding the cage containing the orc male, Kraz as part of the Zul'Aman Timed Event

The path to Jan'alai begins past Nalorakk's platform and feature's a gauntlet with a twist — Amani'shi Scouts are watching for you and must be stopped. 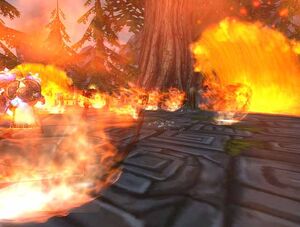 [Amani Dragonhawk] eggs (20 eggs on each side). The

[Amani Dragonhawk] eggs will be hatched throughout the fight by Amani'shi Hatcher and finally at 35% Jan'alai himself will hatch all remaining eggs. He has two enrage timers: one at 5 minutes that is rather unimportant, as it only increases his damage by 50% and speed by 50%, but at 10 minutes he goes berserk. You will need to get him down before this 10 minute timer.

It is important to spread out during this fight because periodically Jan'alai will cast a Flame Breath that does conical damage to a random player and others who are close.

At random intervals (approximately every 30–60 seconds) Jan'alai will teleport himself and the whole raid to the center of the main platform. He will then create a series of Time Bombs. They appear first as small sparks then become large balls of fire. The bombs detonate after approximately twelve seconds dealing significant damage to all players within 5 yards. Players should look for deliberately placed gaps in the bombs which will keep them at least 5 yards from any bomb. (Inverting the camera to look down onto the platform aids in finding a spot). Tips: New bombs usually spawn under random players' feet. If you have Deadly boss mod or similar addons installed, it is actually better to STAND STILL after you are teleported, look for a clear area, and move to it at the last 2 seconds. If you move immediately after the teleport, you are likely to make more bombs spawn under your feet, which means you will have less clear area to stand on.

Alternatively, you may avoid the bombs by running to the "safe spot" that exists in the NW corner of the main platform. There are bone piles in this corner, which make it easier to locate. After being teleported, you may feel somewhat disoriented, making it difficult to run to the NW corner in time. A quick way to orient yourself is to look at your mini-map and spin until the arrow is pointed to the NW corner, then simply run forward. If your entire raid (minus the tank) takes this approach though, it is very important to spread out immediately following the bombs exploding, to avoid having several in the raid damaged by the directed flame attack.

When the Time Bombs cover the ground all exits from the main platform, including those to the hatchery platforms, are blocked by [Fire Wall]. Any attempt to cross this wall of fire will result in a debuff that does 3063 to 3937 fire damage per second for 15 seconds(Divine Shield does not remove this debuff). Mages have the ability to blink through the Fire Wall without gaining the debuff, thereby avoiding all bomb explosions.

Egg hatching places you between a rock and a hard place. When Jan'alai's health reaches 35% he will hatch all of the remaining Amani Dragonhawk eggs. If you have not allowed the Amani'shi Hatchers to spawn a few eggs during the fight this can produce a large amount of Amani Dragonhawk Hatchlings from both sides and will probably wipe the raid. Also, you must hatch eggs fast enough to avoid the boss's berserk timer.

The Amani'shi Hatchers are fairly weak and can be easily killed, killing only one outright and allowing the other to hatch a small number of Amani Dragonhawk eggs each time is a very good idea. For example: Have a rogue or other dps kill the left hatcher when it spawns. Let the other open 3-5 waves and let the offtank take care of these while while 2 AoE classes dps them down. When this side is clear just repeat the same on the other side. This way when he reaches 35% all the hatchlings will come from 1 side and can be easily controlled by tanking them, hunter trap, mage frost nova, etc.

Doing this also means fewer Amani Dragonhawks will spawn near the end of the fight when Jan'alai calls on the remaining eggs to hatch. Care must be taken with the number hatched since the Amani Dragonhawks should be killed before the next teleport/fire ball spell cast because trying to AoE down too many Amani Dragonhawks while avoiding the fire balls is more difficult.

Paladin Off tank: A paladin off tank can easily handle tanking all of the eggs from one side with 1 healer. This method requires 2 high AoE damagers though (warlock, mage). In this manner, the fight can be simplified to just 2 egg sets, and then focus on the boss. Largest hindrance to this method is making sure no one Flame Breathes the paladin with 30+ debuffs. The paladin can also Divine Shield (bubble) out of the debuffs.

Moonkin Off tank: A Balance Druid is a substitute for tanking all of the eggs from one side with 1 healer. The Moonkin should have a large health pool and high armor. This method also requires 2 AoE damagers as well. In this manner, the fight can be simplified to 2-3 egg sets, and then focus on the boss. The Moonkin in this situation should use Hurricane + Barkskin for each set of eggs. Additionally a macro should be ready to switch to Dire Bear Form, AoE taunt, and switch back to Moonkin Form if control is lost.

Front loading hatchlings: If you have a mage for frost nova and slows along with 1-2 other good AoE DPSers, you might want to let the first hatcher clear out one entire side. While difficult, this can work, and doing this on the first spawn means that its easy to reset the fight and start over if an AoEer dies. Note that once the hatchers finish hatching one entire side they'll move to the other side, so be sure to kill it after the first 20 hatchlings are spawned. If you do 20 on the first hatcher spawn and 10 each on the next two spawns the rest of the fight turns into a simple tank and spank, and you don't have any distracting dragonhawks after the 5 minute enrage (which will tend to wipe your raid). If you try and fail, you fail early in the fight and can quickly reset, resurrect, and try again.

Jan'alai will reset if he runs off the platform. After resetting he will despawn for approximately 30 seconds, allowing you to finish resurrection of dead party members. It is advisable that your raid do not release to aid in wipe recovery. If you are unable to complete resurrections before he respawns, simply pull him down the stairs again.

Any members that release and zone into the instance entrance will need to carefully navigate the Scout respawns on their way back to Jan'alai's platform. You cannot summon players inside the Zul'aman instance.

Fire resistance gear is not strictly necessary for this fight, although having a few pieces of it (especially for the adds tank) can make the healers' job easier.

If you have paladins or shamans in the raid, fire resistance aura or totem should be arranged for each group.

The Hatchers will some times go to the same platform, both hatching eggs on that platform. If this happens, it is generally best to kill both Hatchers, minimizing the amount of eggs they hatch, unless the boss is nearing 35%. It is thought that this will happen if the eggs on either side is uneven, so it might not be a bug.