For the pre-Mists of Pandaria encounter, see Jandice Barov (Classic). 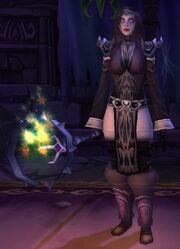 Jandice Barov is the second boss in Scholomance.

Jandice Barov was once an archmage of Dalaran and a powerful illusionist. In life, she developed a spell that "displayed several images of her body that were nearly indistinguishable from her real form. These images duplicated her actions from different locations, making it nearly impossible for her enemies to find her. It was almost infallible." It is also said that Jandice stewards the blood of innocents from Doctor Theolen Krastinov to Kirtonos the Herald.[3]

After years of being ignored in the basement of Scholomance, Jandice has returned. She has been doing quite a bit of study in the field of Arcana.

Following the Fourth War, Mathias Shaw stated that according to Argent Crusade reports, some of the Barovs are still in Scholomance, including Jandice Barov.[2]

Barov's spirit lurked in the recesses of Scholomance for years, but now she has taken a more active role in educating the next generation of magi. Her vast knowledge of illusions has made her both a valued educator and a dangerous opponent to anyone foolish enough to draw her ire.

Clear the room before starting the fight. The tank should charge in and turn Jandice around to keep her facing away from the rest of the party. When she starts casting Wondrous Rapidity, the tank can move behind her to save the healer some mana, as she will not move to keep the tank targeted after the cast or the channel has started.

At 66/33%, Jandice will split into fifteen shadow clones of herself with low health. All of them will randomly cast Whirl of Illusion on players. The real Jandice has black hair, headband, shoulders, gloves and belt — all of the clones differ in one or more of these slots. Players need to quickly find the right one and kill it (killing the wrong one triggers a small aoe explosion that hits your party for moderate damage). Once you kill the correct clone, the real Jandice will respawn, spinning for a few seconds, at the same spot where the clone was when it died, so the tank should land a taunt while she's still spinning before the rest of the group unloads. Make sure to turn her around again!

If you're fighting Jandice on Challenge Mode, or for the

[Attention to Detail] achievement, it helps to have the BarovHelper addon from Curse. It places large obvious models on your screen for the boss and your targeted clone, helping you save precious seconds and avoid unnecessary damage from killing the wrong one.

Alternatively, you can fight Jandice on the opposite side of a bookcase from where she spawns. If you stay there when she splits into her clones, the phase will end after several seconds without needing to destroy any of the clones.

Aggro
Jandice Barov yells: Ooh, it takes some real stones to challenge the Mistress of Illusion. Well? Show me what you've got!
Talking Skull says: I can't bear to watch.

Death
Jandice Barov yells: Ugh... death... hurts? Unreal...
The Talking Skull proceeds into the next chamber without saying a word.

Jandice Barov appears as a legendary Mage/Rogue card in the Scholomance Academy expansion for Hearthstone. Her flavor text reads: "Her parents own Scholomance. Of course she's going to play tricks on the students!"