Jani is a saurid loa known as the Patron of Scavengers, the Lord of Thieves, the God of Garbage, Master of Minions, the Keeper of Secrets,[1] Ruler of Rubbish, Master of all things Discarded an' Unwanted,[2] and the loa of discarded things. Jani looks out for the people that others might be throwing away or ignoring, such as the orphans and the poor.[3] He can be found by interacting with the Mysterious Trashpiles all over Zandalar.

Jani appears to be very protective of his children, as well as being quite the trickster, polymorphing those that hurt his children to humble them while laughing at their expense. Though Jani is the god of secrets, Yazma is the mistress of spies. She sends her spiders, the Eyes of Yazma to hunt Jani's children.[4]

His Zandalari troll followers are called Atal'Jani, based in a restaurant and inn of the same name. 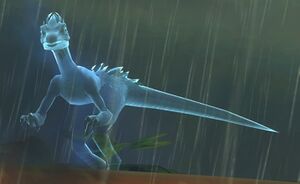 While completing a menial task of killing some thieving saurid harassing a merchant, Jani appears as "The Big One" and attacks an adventurer. When they go to investigate a pile that it disappeared into, they are captured in the Big One's jaws, who reveals himself to be Jani. Jani is furious that the adventurer would kill his children so casually.[5] To teach them a lesson, he changes them into a saurid and forces them to go bite the one who originally sent them, Nokano. After being humbled, Jani lets the adventurer go.[6]

During the Children's Week, Azala stole shinies for Jani.[7]

Jani will watch this new queen very closely. De likes of her do not worship de likes of me, but where gold glitters, refuse lurks not far behind it.

Those that Talanji leaves behind will find me, in good time.

Jani, Jani, loa of trash,
Tell me where to find your cache!
Richmon, poormon, he don't mind.
What's inside? He knows ya kind.


De one ya chose to throw away,
Will have great worth some other day.
He tells a joke, he plays a trick,
Inside ya head, what makes ya tick?

The ruins within Gorilla Gorge may once have been Jani's temple, as that is where the tale of Jani can be found.